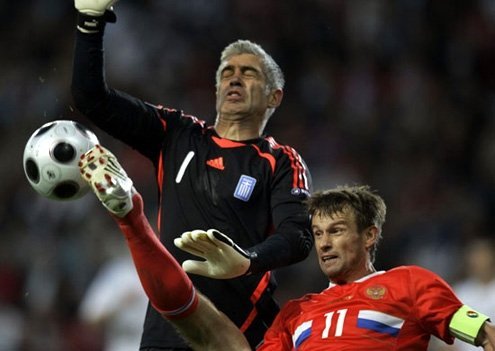 Bemoan all you will the argot that passes for postmodern American English (the lazily imprecise “multiple” canceling out the tighter and more elegant “many”), but while you’re at it tip a hat to soccer for coming to retro’s improbable defense.

In an era where television systematically foments distraction to generate a response, here’s a 100-year-old art form whose presentation has gone largely unchanged.

In American terms it’s an unthinkable display. Two national teams, the Czech Republic and Turkey, say, face off for at least 90 minutes. The prelude is usually brief: 30-to-45 minutes at most. But once the game begins it’s the camera’s only lover. There are no screen crawls with breaking news. No other scores are transmitted. Info-graphics are few. There are no cheerleaders or otherwise unclothed mammals (the players do lose their shirts from time to time). Announcers usually limit their remarks to what’s happening on the field, and the action can’t, won’t, doesn’t relent. Stoppage time is subjective, a mystery of the arbitrary universe. Goal-scoring produces collective celebration that’s irrepressibly cinematic. Commercials are impossible, except at half-time (when most fans are not watching but debating). Few get drunk.

It’s so simple it’s moving: an entertainment that still stands on merit alone.

The game’s rules protect its armor. There are no breaks and no instant reply. Off-the-ball antics are a rude circus of gestures and grimaces. People control intervals, not the other way round. Coaches often speak medievally, as if castles, not goal-mouths, needed defending (“The left side of my defense was creaking. We retreated more and more.”)

The retro “purity” — the unwillingness to divert, slow-down, entertain — accounts for the sport’s systematic failure to take hold in the United States. Apart from disparaging it as dull and low-scoring, network and cable chiefs also lament its compactness. There’s no opening for hype; no way for an advertiser to hijack the event (snap breaks, say), and pay lucratively. The usual sexual narcotics won’t work.

National competitions don’t lend themselves to commercials including players. Passions run high enough that to see a well-known French player hawking Visa cards ahead of a France-Italy game would hardly cheer Visa’s Italian image. This applies across the board. The no-nonsense emotion makes advertising ploys dicey.

Apart from resisting contemporary marketing (compensated for at the club level, which subsists on TV rights and merchandising), Euro and World Cup soccer also celebrates the endurance of format, which in turn honors fans. Only in Europe are soccer fans middle class. Otherwise they’re hard-knocks or destitute, the American boxing crowd of the 1930s. The game they know is simple, suiting their station and circumstance. Simplicity encourages irrational adoration passed down over generations. Bosses know better than to mar this.

Yes, players are paid millions, but the playing field remains level. The referees, though now in Bluetooth-style radio contact with linesmen (a recent concession), are, like baseball umpires, human — they make mistakes, occasionally egregious. Their errors, however, are intrinsic to the passion play. Judgment is conversation’s richest fodder. So far the sport has resisted instant replay.

If you’re in Europe I rest my case.

But if you’re visiting, stop your relentless touring for an afternoon or evening and find a bar with a television. Behold real distraction, which can ironically masquerade as focus. And when people ask you about your trip, you can tell them you saw the real face of “retro.” And it was good.