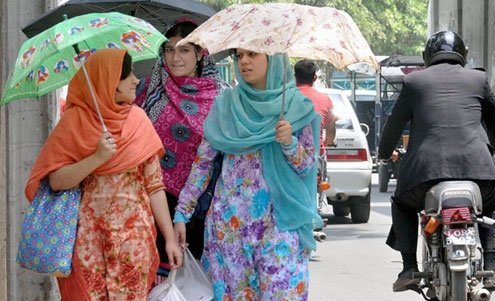 Diana Vreeland could have been talking about Pakistan when she said: "Pink is the navy blue of India."
&

When I arrived for a 10-day visit to Lahore, I was a huffy feminist who chafed at having to keep a headscarf or shawl handy. I resented covering my ankles, the only decent feature left on my middle-aged body. But then I began to see advantages to practices I had long ago dismissed as retrograde religious, male chauvinist impositions.

You’d think clothing that combines Islamic ideas about modesty with the comfort of a muumuu and sweat pants would yield something like a Mao suit. But it doesn’t. On Lahore streets, the range of dress is as varied as Islam itself — from barely-covered heads, Uggs and stretch jeans to the ghost-like, full-cover Afghan burqa. There is no ready-to-wear industry to speak of, so women of all socio-economic levels create their own clothes. Instead of expressing the commercial ideas of a fashion system, they wear colors and styles they choose. Glossy magazines do not promulgate unrealistic (or Photoshopped) body types and the society women they portray show off their individual creations (made with the help of local designers and tailors) rather than brand names. To feed the love of dressing, fabric and trim stores bulge with offerings worthy of the Folies Bergere. Colors, patterns, embroidery, and sequins all make resplendent appearances. Diana Vreeland could have been talking about Pakistan when she said: “Pink is the navy blue of India.”

Based on a long-loose top worn over trousers, Pakistani garb blurs gender and age distinctions. Although the everyday male version is generally white or khaki, the party version explodes with a maharajah’s trove of embroidery and jewels. An 80-year-old woman can still wear what looked good at 16. Face and personality count more than the body (a great irony when considering how hard feminism has struggled to disassociate the female body from mere sex object).

In Pakistan, I learned that Islamic dress is not the only feminist bête noir that has aspects worth reconsidering. Take the “arranged” marriages of the young Pakistani women I met.

In their enlightened families it worked like this: Relatives — and sometimes matchmakers — identify young men they think might be right for a young woman. If both families agree, the young man and his family are invited for tea at the young woman’s house. If the woman likes the man, it goes forward, with more visits and maybe some outings — maybe un-chaperoned. If she doesn’t like him, it ends there, no hard feelings.

Think of it. You outsource dating and the painful weeding out of commitment-phobes and losers to relatives — or a matchmaker. Both have stakes in getting it right either because they love you, or because mismatches are bad for business. Intentions are clear; everyone is playing for the long term. Background checks are built in. The Toronto relatives of a young woman I met were commissioned to verify a Canadian suitor’s claims to wealth. You check your in-laws out before it’s too late. Presumably your family prefers a mate from a family they like and that has similar values (key for a successful marriage). When a dreary or unsuitable prospect is set aside, the young woman and her family share a good laugh over tea around the kitchen table.

No matter where or how, marriage is difficult and a pig-in-a-poke. No one will probably ever prove whether an arranged or a love match is intrinsically better. But the clarity of the Pakistani process seems kinder than the paradox of Western hook-up culture, where sexual bravado often belies — and betrays — a profound longing for long-term companionship that brings material and emotional support and perhaps undying love.

A recent New York Times op-ed piece described how the history of marriage has mirrored the late American psychologist Abraham Maslow’s “hierarchy of needs.” Over centuries, what began as an institution that satisfied basic needs such as “food production, shelter and protection from violence” has evolved into one that now is expected to satisfy needs for self-expression and personal fulfillment.

The all or nothing typology might apply to individual marriages. We all know of so many marriages that slide from the “all” — new love’s sense of fusion at the soul level — to “nothing” — sharing a roof with a seeming stranger whose hair in the sink disgusts you. But enlightened arranged marriage, which begins at “nothing,” has only one way to go. Or as an American friend replied when I asked for the secret of her 60-year marriage: “Low expectations.”

Yes, both Islamic dress and arranged marriages bring unhappiness and abuses. But we must be careful to judge institutions by their averages rather than by their worst examples. We would not abolish restaurants because many are obese. Nor would we junk all civil liberties because, in the extreme, they harm people too, such as the homeless who freeze to death on city streets.