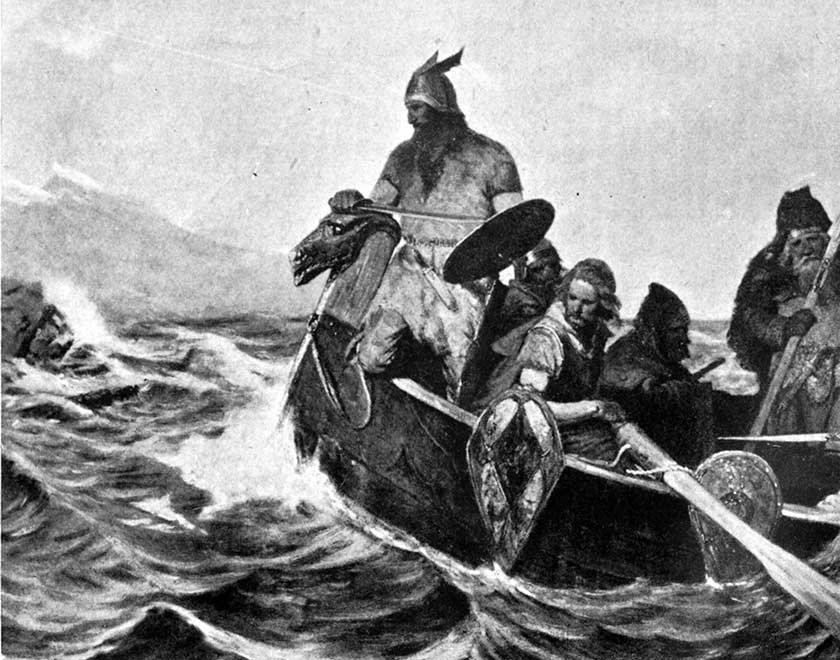 Art has taken considerable liberties in its portrayals of Viking culture.
A

The algorithmic suggestion probably originated from my recent purchase of a history of Constantinople. But at least in this case, the artificial intelligence behind the algorithm proved surprisingly topical. Its suggestion coincided perfectly with the ubiquitous image of QAnon supporter Jake Angeli who last January charged into the U.S. Capitol in a fur-trimmed helmet with horns.

As the AI predicted, I did appreciate Price’s immense but deftly written tome, which uses recent archeological finds and new technologies to debunk longstanding myths about the Vikings.

With their supposed blond hair and blue eyes, the Vikings represented the origins of a racially pure master people.

Price swiftly debunks the horned fiction. No such helmets have been found in Viking graves, ancient texts or their adversaries’ accounts. This detail illustrates one of Price’s most important observations: that Viking histories usually reveal as much about their authors — and their times and concerns — as they do about the Vikings themselves.

Medieval writers used the Norsemen’s polytheism and tendency toward violence as foils to exalt “moral” Christianity’s expansion. For 19th century European Romantics, whom we can thank for initiating systematic Viking studies, the Norsemen embodied the vigor and mystery of what philosopher Jean-Jacques Rousseau called “noble savages.” Richard Wagner, the creator of epic operas, pushed the Romantics’ interest even further. He stuck newly-rediscovered Norse myths into his musical cosmology.

The Nazis went even beyond. Their ideologues forged a Nordic pseudo-religion that was to replace Christianity, to which they added a mishmash of ideas about racial superiority. With their supposed blond hair and blue eyes, the Vikings represented the origins of a racially pure master people.

Since then, reverence for the Vikings has been embraced by neo-Nazism and white supremacist movements.

However, as Price shows, the likes of Capitol-stormer Angeli might want to reconsider. Price’s book repeatedly suggests that the Vikings might not make very good mascots for white supremacy.

For one thing, the etymology of the word Viking is detached from ethnic identity. “Viking” was a lifestyle that included travel, sacking villages, and plundering the spoils.

Today’s Viking aspirants, who deny climate change and don horns, should take a break and read some history.

Far from being racially or ethnically pure, ample physical evidence shows that the Vikings moved and mingled wherever they went. They lived in multi-ethnic settings, whether in Great Britain or Constantinople or in the Baltic. They cross pollinated ideas and technology, often with contradictory results. One remarkable archeological find is a single jewelry mold that could turn out both Christian crosses and Thor’s hammer amulets.

Violent Viking invaders and those they colonized mixed and mated, and their DNA broadened as a result.

Today’s white supremacists insist immigrants won’t “replace” them. Price’s account shows that time and again “us” overlapped with “them.” Violent Viking invaders and those they colonized mixed and mated, and their DNA broadened as a result.

Price does not flinch from the Vikings’ grisly side. He does not downplay the violence deeply rooted in their culture, nor does he ignore infanticide and slavery (both fundamental parts of their culture). Burial sites show women could be wealthy warriors, but could also be treated as chattel. While not “just like us,” the Vikings were certainly close. Toys and child-size weapons reveal impulses familiar today; letting children play and preparing them to get ahead as adults. Monuments and burials commemorated indelible bonds of affection between warrior comrades and fathers and sons. We know that raiding parties included men and women. They also possessed the desire — as old as humanity itself — to start families in new places.

One of Price’s most touching passages describes the encounter between Vikings and native North Americans on the East coast of Canada. Each represented the farthest reaching prong of humanity’s great migration out of Africa — one arriving via the Bering land bridge and the other via the North Atlantic.

Though from opposite ends of the earth, both groups were migrating in search of better pastures, better hunting or better goods. The movement of both represented a fundamental human quest for something more.

And no one wore a helmet with horns.