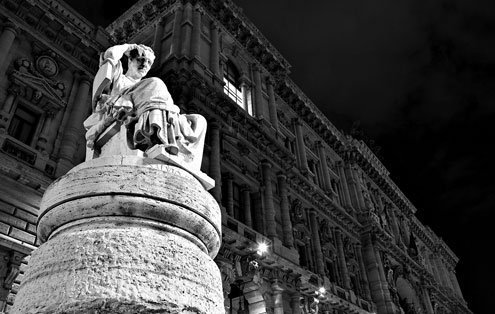 The Rome palazzaccio, seat of the Supreme Court, sits on massive concrete platform that the Tiber River has been eroding for decades.
I

t was a great breakthrough in medicine when researchers finally started to see the effects of psychological states on physical health. The word they most liked using to explain this interaction was “stress.” Its introduction signaled an important change in medical thinking, and a greater respect for the effects of the psychological and the emotional on the physical.

But now that the study of psychosomatics (the effects of psychological states on physical conditions) is more accepted in medicine, perhaps we can go beyond the concept of “stress,” which has certain implications that are misleading.

Etymological dictionaries point to an origin of the word “stress” in the Latin strictus, meaning to draw tight or to compress. Architects speak of “stress” as the force put on a building by outside factors or its own elements. The walls of a building are exposed to stress from the weight of the roof. A building must be designed to withstand compact crowds in small places. Otherwise, if you decide to have a large party in your apartment, all of you might fall into the apartment below.

But the weight of the roof or the contents of a building is not in itself the problem. What matters is the structure not being strong enough to hold it. Until major repairs, palazzaccio — the Italian Supreme Court building in Rome’s Piazza Cavour and near the banks of the Tiber — was sinking into the ground and cracking apart. Its ornate stoney walls were too heavy for its foundation. Something similar is true of the Tower of Pisa. The Roman-era Pantheon has a roof that weighs almost 5,000 tons, implying a colossal stress on both walls and foundation. Yet it’s still standing after 2,000 years.

So it’s not stress alone that cracks the walls of a building or makes it sink into its foundation. It’s stress in context, with context supplied by the sustaining structure.

That’s why I think the term “stress” is misused when applied to psychological problems. It’s not the stress that crushes us but stress with insufficient sustaining structures.

So what are the sustaining structures for psychological stress? They’re not physical, but have to do instead with relationships, both old and current.

In ideal conditions, a child grows up with sustaining adults. These adults respond to his needs as they are expressed, comfort him when he’s distressed, acknowledge his feelings and respond appropriately and love him unconditionally. He comes to believe he’s the kind of person that deserves being cared for and loved and expects that others in his world will be willing to care for and love him. Far from making him dependent, far from making him unable to deal with the hard knocks of the cruel world, he will be able to trust himself to find reliable friends and to love himself even when he’s alone. He’ll have a sustaining structure of internalized self-worth and resourcefulness and will know how to accept help from outside when he needs it. He won’t be so cynical about others that he won’t look for help and won’t feel so worthless that he has to accept indiscriminately any person who appears to want to be his friend even if they have ulterior motives. He will have had the structure derived from his early relationships with his parents and will also be able to find good relationships in his present life to continue to sustain him.

If, in contrast, a child was not responded to when she cried or asked for help, she will feel there’s no point in ever asking. If she felt that she was only loved if she was perfect, she’ll believe she can’t expect others to help her since, like everyone else, she isn’t perfect. If her feelings were not responded to appropriately, with soothing or comfort or encouragement, she will see her feelings as toxic and think she should stay away from others when she has them. If no one was available to help her when she needed it, she will consider world a desolate place in which you can’t trust anyone — and that in any event she’s not the kind of person anyone would want to help. She won’t have the solid foundations of childhood to draw from and will lack the means to find sustaining relationships in her present life (unless along the way she’s fortunate enough to find someone who manages to break through her deep-seated beliefs).

The first child will grow up to be the Pantheon, and be able to sustain the heavy stresses of life without cracking or sinking. The second will be like the palazzaccio, sinking under it’s decorative burdens and cracking under the stress. So when you consider stress, consider not just the word, but also its context.