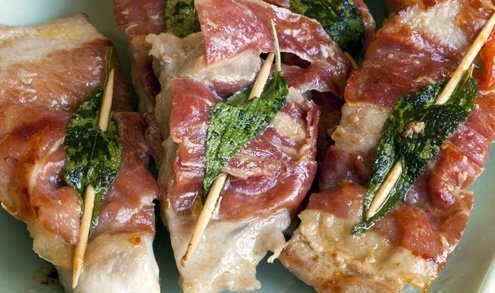 Saltimbocca is the winner among main courses.
N

No one eats in every-course quantities any more. It’s unhealthy for body and pocketbook. The only exception is a special occasion — Sunday lunch in famiglia, say, or first communions, baptisms, christenings, circumcisions, mitzvahs and other banquets held after a religious ceremony.

That doesn’t mean Italians have stopped building meals from these cultural lynchpins. Each of the five options remains and can still co-exist. They’re simply more often mixed and matched according to a Mediterranean Diet credo.

The starchy carbs provided by primi hardly ever complement the hearty proteins of the secondi entrees. Rather, they prefer the company of either an opening antipasto or the healthy nutrients of the contorno side dish.

Rome’s favorite antipasti, primi, secondi, contorni and dessert staples — those enjoyed at home or dining out — are actually fairly contained in number. And I’m not talking about what tourists go for, or seek.

• Favorite antipasto — Prosciutto and melon: Despite seasonal restrictions (cantaloupe melon is in season only between June and October), this sweet and savory hors d’oeuvre combo never goes out of style. Italians love to start their meals with antipasto, sometimes preferring it to a pasta or risotto dish, often skipped altogether in favor of the entrée.

Juicy wedges of cantaloupe melon blanketed with silky slices of salty cured pork predispose heart (and belly) to bliss. A sensual alternative to melon is figs, which enjoy an even narrower seasonal window. Add pizza Bianca (savory flatbread typical of Rome) and you’ve got yourself an antipasto sandwich fit for kings.

• Favorite primo — Lasagna: As my gourmand 10-year-old son preaches, “I don’t know anyone who dislikes lasagna,” and unless you stray from classic renditions of this classic Emilian dish, opting for more modern, creative versions, I tend to agree. Whether layered with rich, meaty ragù and béchamel, or arranged between tomato-less coats of pesto, mushrooms or cheese, lasagna is the ultimate Italian comfort food. More of a home-cooked specialty, fresh lasagna on a restaurant menu turns adults into children. They throw weight issues to the wind. Lasagna is often only followed by a light vegetable dish, with dessert as a possibility.

• Favorite secondo — Saltimbocca alla Romana: Romans are very proud of their saltimbocca. “Jump in the mouth” is the perfect moniker for the tender, succulent bite-size veal cutlets fitted with a small square of prosciutto and a fresh sage leaf secured with a toothpick. Lightly dredged in flour, they’re pan-browned in butter. Watch them jump in your mouth and disappear in seconds. But beware the toothpicks.

A great side dish companion to saltimbocca is a warm plate of agretti (earthy, iron-rich knot of meaty grass that looks like seaweed and tastes somewhat like spinach).

• Favorite contorno — Puntarelle or carciofi: The polls haven’t closed on this one. There is no one favorite between the two seasonal side dish contenders, both of which enjoy immense popularity on the Rome table. Puntarelle are the sprouts of a chicory variety called cicoria di catalogna, picked while still young and tender and trimmed so that when they’re plunged into ice-cold acidulated water they curl and maintain their crisp, juicy nature. The dressing for puntarelle admits no digression: olive oil, vinegar, oil-preserved anchovies and fresh garlic (reduced to a punchy cream with the help of a mortar and pestle).

Artichokes, on the other hand, in season between February and May, are extremely versatile and come in a tremendous variety of shapes and colors. Tiny delicate ones are well suited to being eaten raw in pinzimonio (a dip made with only olive oil and salt) or preserved sott’olio (canned in oil). As springtime progresses, here come the purplish green grapefruit-sized globe artichokes locally called mammole. They’re suitable to being sauteed, stuffed, braised, fried and used in a variety of contorni side dishes, salads, pasta sauces, and lasagna fillings.

• Favorite dessert — Tiramisù: There’s disagreement about the origins of this dessert, but it’s certainly not native to Rome. Yet it’s found huge acclaim in the capital. Housewives and nonnas make tiramisù on a massive scale. It’s eaten for merenda and dessert nationwide, and served at posh dinners in single portion cups.

In Rome tiramisù has become somewhat of an obsession. There are chains of tiramisu shops that market various versions. There are even schools of thought regarding the espresso coffee-soaked biscuit of choice that goes into tiramisù’s base layer. Some stay classic and opt for absorbent ladyfingers. Others experiment with Pavesini, a commercially manufactured eggy sponge biscuit. Some extravagant patissiers have been known to bake special buttery crumbles just to support creamy nature of tiramisù. Where’s my spoon?