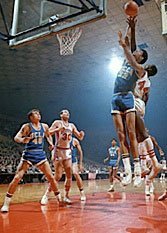 week after my father tried killing himself with the popular barbiturate known as sodium seconal, I went on a Boy Scout camping trip. The doctor, Buddy, manufactured cheer on order. “Your father would be happier if you went,” he said. But he did not look happy, those alien eyes colonized by ghosts. I once stole several of the bright red pills — sleep candy — and probed them for intimate clues. The pellets stuck to my tongue when I pried them loose. I was 12 and dizzy.

But the camping trip was important. It was my initiation to the icy chatter of the Chesapeake Bay and I was determined to show the other boys I had the appropriate teenaged mettle. Still, there was the matter of the small Sony eight-transistor radio and the six-inch television. I had bought both with money earned from my afternoon paper route and guessed that they would come in handy for the game.

And I could not miss the game.

“Listen boys,” said Ernie the assistant Scoutmaster before we hoofed loudly toward the convoy of waiting Fords and Chevrolets, “I don’t want any of you to forget, as we go out to our front, what’s happening on the other front…”

His eyes misted over. “Off you go!”

The other front was Khe Sahn. North Vietnamese regulars had attacked the Marine garrison and cut it off. On the grainy screen by the bay I saw soldiers scampering around contagious thuds. Behind the anchorman was a board with a number that struck me as too congruous: 111. It was the battle’s early death toll.

Why was the game important? I’m not certain. Not now. Maybe big games help measure time. Perhaps in an era when hype was in its infancy and big events were truly big it seemed reasonable to believe in them.

And the No. 1 UCLA basketball team had not lost in 47 games. It had a center, Lew Alcindor, who was more than 7 feet tall. The other team, No. 2 Houston, had its own star, Elvin Hayes. When I asked my scout leader who he thought would win he said, “I don’t watch the negroes.”

“The Americans,” said my father, musing on Khe Sahn, “have not learned the lesson of the French. You cannot beat the Vietnamese in their home.”

UCLA played Houston in its lair. But not at the university. The game was so important and tickets so sought-after that for the first time ever the venue was a stadium, the Houston Astrodome. In yet another first, a U.S. network would nationally televise a regular-season college basketball game. In the end, 52,693 people watched what was called, in 1968, “The Game of the Century.” There would be many more such labels in the decades to come, when the fashion took hold, summoning hoax into all things superlative.

I was in a tent. I was cold. The tiny television was tucked in my sleeping bag attached to a bulky power pack. Hayes was extraordinary, a fancy prowler in Alcindor’s back yard. His shots were willowy. He struck 17 of 25, and scored 39 of his team’s 71 points. Alcindor, who would later become Kareem Abdul-Jabbar, was helpless. Houston won, 71–69.

When the news announcer came on, he began, “In Vietnam…” And I noticed the number had increased. It was no longer 111. It was now more than 500.

“Suicide,” the doctor said, escorting me to a place near the apple tree, “is when you don’t think life is worth living. It’s when you want to go away, when you do not see the life in others. Do you understand?”

I did not, not precisely, but I nodded.

After the game, Alcindor was inconsolable. It seemed a terrible fate, to lose. Maybe, I thought, Alcindor and my father and the Khe Sahn Marines were all briefly united — in defeat, in helplessness, in despair.

My father found me snivelling vacantly near the garage. He said nothing for a long time. Then:

“That Elvin Hayes! Do you see him! So full of life!”

His bones in my hand, we re-entered the house together.