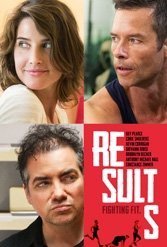 Newly divorced and out-of-shape, lovelorn Danny Ross (Kevin Corrigan) rents a mansion in Austin, Texas after inheriting millions from his estranged mother. That’s when he meets Trevor (Guy Pearce), a fitness guru with a dream of expanding his business called Power4Life. His bossy ace trainer and former lover Kat (Coby Smulders), two parts anger and one part chill, jumps in to kick start the depressed Danny, which is all well and good until weird and awkward Danny falls for her, which in turn makes dog-loving, commitment-phobe Trevor jealous.

Writer-director Andrew Bujalki’s quirky romantic comedy is smart, delightfully adult and never condescending. It’s basically about a gloomy middle-aged man (Danny) eager for companionship of any kind and two personal trainer nerds (Kat and Trevor) meant for each other but unwilling to acknowledge it because they’re stubborn (more at home with body language) and lack any kind of coherent emotional vocabulary.

So it is that disruptive, devil-may-care Danny, who still pines for his wife, reluctantly plays cupid in a love dance that lampoons fitness culture while conferring sweet decency to everyone involved. Goofy Trevor, driven in work but passive in love, gets to learn more about what he really wants; Danny, broken-hearted, lightens up (if only a little); and Kat, a raging thirty-something with nine axes to grind, learns to smile. Everyone wins, but not before reams of requisite (and often comic) anxiety. Corrigan, Pearce and Smulders all shine. Charming.