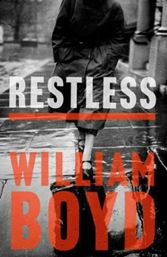 Having kissed enough frogs in the categories of World War II espionage/love-story and intergenerational mother-daughter incomprehension, this reviewer quickly recognized Boyd’s book as a prince of a book.

England in a late 1970s summer: Ruth Gilmartin all-around inconclusive young woman goes for a visit to her mother, a spry 80-year old who claims to be confined to a wheelchair. Her capricious — and Ruth suspects mendacious — use of the chair turns out to be only the first of the mysteries and lies that her mother gradually reveals. From the first chapter in a series of sealed manila envelopes, Ruth learns that her mother “Eve Delectorskaya” was actually born in Russia and was a spy for the British. Visit by visit, the story of her mother’s training and involvement in one of the odder facets of the British-American “special relationship” (when the British were using dirty propaganda tricks and espionage to convince the isolations U.S. to enter World War II) and a tense love story.

As Ruth copes with radical fringes of German politics in the form of the dodgy brother of her child’s leftist German professor father, the students of English as a foreign language that are both her livelihood and escape from finishing a dissertation on German history, she gets drawn into her mother’s still unfinished business. This book has it all: spy-thriller, stay-up-until-it’s-done suspense, and coming of age. It also comprehends and respects parents as individuals distinct from their parental roles, affords solid historical background, and delivers characters that are three-dimensional and compelling.