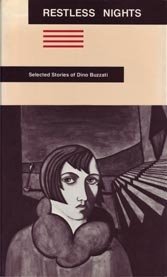 By Dino Buzzati, translated from the Italian by Lawrence Venuti

uzzati’s short fiction pushes the Tartar steppes into orbit. They’re like a version of Earth as seen by aliens perusing news snippets who imbue them with a perfect foreignness. Tailors sell jackets whose pockets grow bills; flying saucers land with little men who demand to know the meaning of crucifixes; Einstein at Princeton grapples with a black devil who applauds the creation of the A-Bomb; a count’s pampered wife grows wings to mask her adultery. Buzzati delicately warps mundane details to suit his parallel universe. A woman who jumps from a skyscraper not only tumbles to her death but ages while falling. An Eiffel Tower engineer, recalling his work, regrets that no one ever saw the size of the “real” tower, which reached into the stratosphere.

Height, speed, and size intrigue Buzzati, Futurist-style, as in “Elevator,” where up and down are slowed down to give unrequited love thickness and substance. In the beautifully macabre “Elephantitis,” set in 2007, molecular structure betrays its human masters and makes polymers expand and contract at will (“Imagine your child’s doll grew beyond measure, reaching the size of an elephant.”) Most of Buzzati’s parables were written in the mid-1960s (he died in 1972) and mischievously situate technology between the helpful and the ominous.

Simple in form and prose, his tales are often cliffhangers. In “Wind,” a man believes his beloved has betrayed him, but the howling blurs the ends of her sentences. Making headway against nature, says the narrator, makes one feel “alive, dramatic, different,” like each of these 22 stories, though many refuse conventional closure. Often called “little-known” or “underrated,” Buzzati is both. But neither word does justice to his genius.