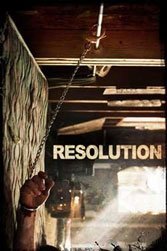 It’s an interesting gambit from writer-directors Justin Benson and Aaron Moorhead. What follows, however, is an edgy cross between ghost story and buddy movie. Once at the cabin, Mike chains Chris to a post to sober him up. Enter hallucinogenic events. Mike finds withered photos and cassettes that seem to tell wicked old tales – old, that is, until the two buddies inexplicably appear in them. As it turns out, the cabin is on an Indian reservation where junkies, religious zealots, and researchers congregate like bats. Over the years, some have vanished without a trace. It’s as if the cabin were an entity (or, if you prefer, a metaphorical filmmaker) in search of characters to populate stories whose endings it has already scripted. Seeing your fate pre-screened doesn’t mean you can rewrite it.

Slowly, however, the movie’s mystical undertow, rumination on addiction and unhappy (film) endings, is undone by the plodding “bro”-laced banter between Mike, a father-to-be and do-gooder, and Chris, an outcast who wants to die. Between so much provocative but hackneyed ghoulishness, the two quarrel and re-bond by reminiscing about high school.

The best ghost stories, even those that expand the genre, require stronger glue than what writer Benson has in his cabin. A coyote-like Frenchman who knew two researchers who went missing feeds Mike the film’s punch line. “I think,” he says, “they were searching for monsters, and they found each other.”