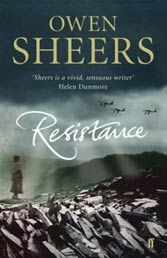 The Normandy invasion has failed. Nazi Germany is camped out in Britain, Churchill and the royal family exiled to Canada. Meanwhile, Japan-besieged America has tossed out FDR. In Germany, Himmler dwells in a castle swelled with plundered European spoils. Suspension of disbelief (political, social, and military) is essential to embracing poet Sheers’ fable about a German patrol that comes to rustic rest in rural Wales.

The sheep-grazing vale stumbled upon by six weary soldiers (led by Captain Albrecht, a Rilke-loving, Oxford-trained intellectual who knows his Bach) has lost its husbands to the murky British resistance. “Remote and manless” is how Albrecht describes the Olchon valley. Len Deighton (“SS-GB”) and others have previously plowed this “what if?” terrain. Sheers studies the ties that bind invaded and interlopers by putting them at the center of a vivid pastoral.

Young Sarah, whose husband Tom has vanished into insurgency, tends to dogs, sheep, and ewe as if to children. Life is hard. She and the other local women gradually accept assistance from Albrecht and his benevolent men (Albrecht ostensibly seeks a medieval map that Himmler craves).

Sheers (“The Dust Diaries”) is foremost an imagist. “The pink semaphore of his hands as he slipped the straps from his shoulders,” he writes of a radio backpack coming off a soldier. Sheared wool slips from a woman’s fists “like spurts of smoke between her knuckles.” Lovely stuff, but the story struggles with the meaning of collaboration, and Albrecht himself is an apologist archetype who rarely escapes the “good German” mundane. Sheers is a gifted observer shortchanged by a worn-out story.