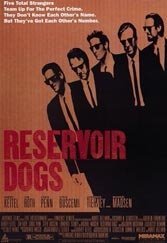 Criminals in league constitute an ephemeral tribe. A tribe can quarrel. But woe betide a quarreling tribe when stakes are high, suspicion rife, and psychopathic behavior so irresistible it turns into lust. That’s Tarrantino’s sandbox here, and it won’t stop leaking blood.

The diamond heist done, but messily, the battered Blues Brothers gang finds itself in a warehouse where recrimination breaks out and temporary alliances start to fray. In Tarantino’s fuck-you Darwinian world, disagreement expels guts in a hurry: Here, it’s acres of verbal foreplay followed by a quicksilver survival of the nastiest.

Someone, an informant, has soured the robbery — Mr. Nash has a bullet in the gut — but who’s the double agent? Mr. Blonde hauls in a cop, Marvin Nash (Kirk Baltz), and beats him silly. But answers don’t come, and torture upstages beat-downs, followed by every man for himself, the criminal virus that keeps on giving.

Tarantino keeps it as taught as a stage play, assisted by the warehouse setting and Hemingway prose. He’s keen to portray dog-eat-dog fallout as a loss of trust and moral identity (the color names, as in “The Taking of Pelham 1-2-3,” helps out). Madson’s Blonde is rabid as rabid gets and Keitel’s “hardy fuckin’ har” Mr. White is crisp and peremptory: “If you shoot this man, you die next. Repeat. If you shoot this man, you die next.” But it’s the group meltdown that matters.

This is Tarantino’s crudest and best piece of mayhem, less layered and less polished than the subsequent “Pulp Fiction,” and more feral as a result. From square one you know how this one’s going down, badly, but to Tarantino’s credit that changes nothing.