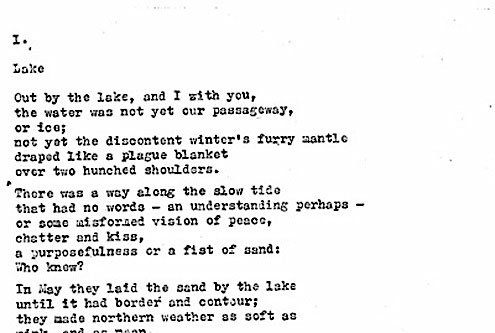 She’s written to you after 15 years. You read her words for code but there’s none. There’s no mystery. The Internet is an amoral detective that comes cheap. She wants to say hello. She may be in your city. It’s a greeting card from the past.

Live long enough in a mausoleum and you learn to dig. It’s a boy’s impulse. You’re back at the beach with your father’s birthday gift, a shovel. You remember the tide filling in the shallow holes and how the sand crabs, sea-insects made from gibberish, made you giggle. You alone controlled their delicate fate.

In a closet you find a sun-deprived folder. In it are letters dated 1975, 1979, 1981. Amid the exiled tidbits you are looking for signs of her presence.

Some details you remember. You met in autumn 1979, in Rome. You lasted 15 months, into the winter of the next year, on the East Coast. John Lennon was shot, you heard it on the radio. Then you drove north, it was December. You were in a diner when she walked away into the snow. You left the eggs and drove out of town, weeping.

Then, a decade later, another chance. In Rome, by the Tiber where it roils unhappily under an ancient hospital, you walked and she mused about her uncertainties. Scheming to woo, you didn’t listen. Forward in time to the tropics, her presence at your invitation, pledges fulfilled on the spot where Christopher Columbus made landfall on his second trip east. This was a new promised land, he thought. When it wasn’t, he just sailed on. You told her you loved her. She said she knew.

You find a letter from your mother, 1977. She counsels patience. About what isn’t clear. This is the reassurance of the dead, atrociously calming.

You find a note from a Philadelphia newspaper, 1980: “We have read your clippings with interest. We regret to inform you we have no openings at this time.”

There’s a rose petal in a mauve envelope which held up to scrutiny, dissolves. The letter is from a woman named Lucy. She says she wants to hear from you. She has drawn a heart around the head of the saint who is also a stamp. It is 1979. You are 26.

You find a typed poem called “This Will be the End of It, I Think,” dated November 22, 1981. You recognize your arctic symmetry:

“This will be my pulse, a stiff sleeve;

This my heart, dry valves heaving;

This the salt, shoring up the street.”

You read on, another poem called “Lake”: “Asleep, I saw a rabbit resting in your dark hair…”

And you know it now: The time of the then has come to greet you.

Between the folds of the poem paper is a brittle slip you don’t remember ever seeing. On one side is a list of your dead mother’s dinner guests. On the other, beneath the word “Because,” she has written:

“To enter a room and not notice or not care what your influence is… it indicates immaturity. It indicates, again, the creation of your own atmosphere, with utter disregard for others. Upon this, a relationship cannot be built. All responsibility is dropped. I must call. I must say if I want to see you. I must tell you when I’m frightened. You cannot see!? You don’t take the time to see!?”

You never saw these lines. You were not intended to.

This is exile’s fullest wrath.

The poem called “Lake” you produced at a northern inn, and you recall the turbulent night of its writing. What you didn’t take the time to see, what you couldn’t, that poem didn’t know. Like so many tidbits, it thought highly of itself before its imprisonment. Now, like so much that’s hidden away for so long, it’s senile.

“And what greater peace than ignorance?

As soft as mink, and as mean.”