Requiem for Via Veneto 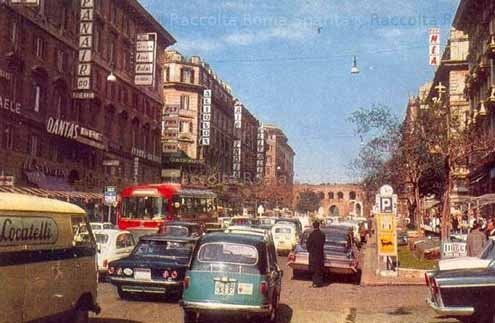 In the 1950s and 60s, Via Veneto was a madcap traffic by day and packed bars by night.
T

erry Thomas! There he was in person. At the table beside us no less. It had to be. It was June 1967 and my father had flown me to Rome where one evening we sat along on Via Veneto, that mecca of stars, at a bustling bar called Café de Paris. Since the mid-1950s, when the prospect of cheap moviemaking attracted Hollywood directors and stars, the upper part of the street near the Excelsior Hotel and the U.S. Embassy had grown into star central. Fellini’s “La Dolce Vita” reveled in celebrity-powered visions. Loren, Lancaster, Burton, Taylor, Mastroianni, Mitchum, Ava Gardner, all camped out at one time or another in Via Veneto’s bars, illuminated by the aggressive flashbulbs of roaming celebrity photographers, paparazzi.

Terry Thomas, a hugely popular mid-century British comic, kindly signed my napkin before turning his attention to his cocktail guests and lighting up another cigarette. I was thrilled.

Almost exactly 25 years later, in 1992, I sent a magazine reporter to the street to make sense of its decline. The Italian movie-making business had of course faltered, stars had drained out, and economies had lurched backward and forward several times. But Via Veneto’s affliction seemed more like Bohemian-era tuberculosis. Its big hotels still flourished, more or less, but its two bedrock cafés, Paris and Doney, hit rocky times. Doney, burderened by rumors of ties to organized crime, shut down for years. By 1990, seemingly immutable Café di Paris was a shadow of its Fellini-era self. Even Harry’s Bar further up the street, a knockoff of the Venice version, looked somehow emaciated.

My reporter cited the causes as traffic — the street had been choked to a standstill (parking was impossible) and a shift in emphasis to trendier areas of town. Underworld landlords hadn’t helped, nor had the epidemic of 1970s urban terrorism. Some local owners believed that transforming the café drag into an extensive pedestrian island, with nearby parking, would restore some of the old hubbub. The project actually came to fruition in the late 1990s as part of a larger development that included a huge underground parking lot and Metro stop. But it all backfired, with the island producing gargantuan bottlenecks. Drivers headed to the city center steered away from Via Veneto. People who parked in the giant subterranean garage ironically avoided the area above. The island was eventually dismantled and Via Veneto left to sink or swim on its own. It sank.

My reporter interviewed Guido, the head bartender at Harry’s Bar in 1992. “Via Veneto,” he said, “will soon be another Via Barberini; a dead street of banks and real estate agencies.” Hotel managers and tourism officials scoffed at his dire assessment.

But here were are in 2017, a further 25 years on, and Via Veneto is in fact a dead street of lonely luxury hotels, empty boutiques, closed storefronts, and marginal nightlife. Doney still exists, albeit reconfigured, but its outdoor tables are often empty. Café de Paris has been shut for years, though sad signage remains outside. Two large newspapers kiosks, once bulwarks, sell mostly in Italian dailies and novelty items, struggling to maintain a commercial foothold as Italians increasingly get their news from phones and tablets. As Guido predicted, banks are a dime a dozen, ironic testament to a country whose banking system remains chronically unstable.

Fifty years after the Western world saw Via Veneto as the most vibrant, star-studded street on earth, all that’s left are faded memories. Terry Thomas made his last movie in 1980 and died a decade later. Like most of Via Veneto’s one-time celebrities, he wasn’t around for its denouement.