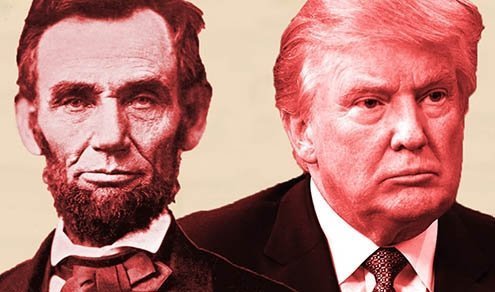 Trump and Lincoln: a dead-end comparison.
I

magine it’s mid-April 1861 and you are Abraham Lincoln. You’ve just been elected the 16th U.S. president, the first Republican, on a platform of preventing the expansion of slavery into new western territories. The country is fiercely divided and aflame with passions over states’ rights. The Dred Scott decision by the U.S. Supreme Court, the attack at Harper’s Ferry and the vote by seven Southern states to secede from the Union has led to an incendiary state of affairs between North and South and U.S. Army troops at Fort Sumter have just surrendered to the Confederate States Army, igniting the national powder keg and transforming it into Civil War.

Though you oppose slavery, you have never intended to dismantle it where it already exists. But the South doesn’t believe you and is determined to see slavery expand westward. The Confederacy is lashing you with hatred and ridicule. In the North, you are being called a barbarian, Scythian, yahoo and even a gorilla. There are calls for your assassination.

You are melancholic by temperament, a man who suffers from deep depression. A letter arrives.

It is from the Republic of San Marino, the oldest surviving republic in the world. It is signed by that country’s Captains Regent, its two leaders, congratulating you on your election victory and extending their support to you for the trials that loom ahead. The San Marino leaders propose an alliance between their tiny Apennine Mountain country and the U.S. as two democratic nations. The leaders offer you honorary San Marino citizenship.

The letter has great meaning to you. Since its founding in 301 A.D., San Marino had been through its own critical periods, staving off conquest attempts from the likes of French armies under Napoleon I, the pope in Rome and others. Yet in 1600 the country promulgated a written constitution that has stood the test of time.

Over its history San Marino has gained a reputation as a place of asylum from persecution and remained committed to those principles even as the country was being surrounded on all sides by the newly united Kingdom of Italy. In 1861, whether San Marino’s right to exist as an independent republic would be respected was unclear. Yet from its own perilous position, San Marino extended a hand of friendship across the seas.

Despite public outcries and personal trials you become even more determined not to permit the South to secede from the Union. The country must stay as one, even if war was the only viable vehicle to get there.

Now imagine it is mid-February 2018 and you are Donald Trump. It is just over a year since you have been inaugurated as the 45th U.S. president, the 19th Republican. Newt Gingrich’s 1990s “Contract with America,” wars in Iraq and Afghanistan, the 2008 Financial Crisis — which passed without penalty to those at fault, the gutting of President Barack Obama’s Affordable Health Care Act, and other matters of serious bearing have combined to bake a furious partisanship into the country. A Republican-led Congress intent on satisfying its constituents to the exclusion of all else has only exacerbated the problem.

On your own, you have managed to elicit deep-seated protests — against your comments, positions and actions on immigration, against your assaults on the press, against trivializing sexual harassment. You have added fuel to the fire by making controversial remarks on deaths in the military, insulting your own intelligence agencies and downplaying evident Russian involvement in 2016 elections— and this is but a short list of your glaring outbursts.

You are a narcissist who has been called every repellent name in the book. Your national approval rating is near 35 percent and your disapproval rating at around 60 percent.

No national topic is more explosive than guns. The country has seen many children and teachers slaughtered in schools, and the disagreement between gun rights advocates and those seeking gun controls has been ramping up for years — only to reach a fever pitch in the wake of the Valentine’s Day slaughter at Marjory Stoneman Douglas High School in Florida.

Though your behavior has served to divide the country into even stauncher factions, you have an opportunity to bring the country together on the issue of guns. The U.S. is arguably undergoing a kind of civil war on your watch, and yet in that context you choose to suggest that selected teachers in schools across the country be armed.

You have not received a letter from the Republic of San Marino in support of your goals or to offer you honorary citizenship. It is certain you never will.