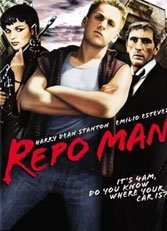 The “Blade Runner” era got some punk from Tom Cox’s chirpily bizarre film. Newfound effects gave directors a chance to conjure up Industrial Revolution London and push it into a future century. Sci-fi noir was all the rage, an antidote to treacle-down Reaganism.

Plot? Um, next question. Bad boy Otto (Emilio Estevez) gets a job repossessing cars for coke-sniffing pseudo-gangster Bud (Harry Dean Stanton). When a much-sought Chevy Malibu (a car with a temper) slips into the picture, Cox goes at the movie with guns blazing. Since the Malibu is worth twenty grand to lucky grabber, you get… oddball chases in a weird city with hints of extraterrestrials. Oh, and the car glows in the dark.

“Repo Man” is funny, unconventional, and wildly endearing in a macabre sort of way. Otto and Bud are a memorable tandem (Stanton’s skinny leer is one for the ages). Memorable also is having Repo Men stand-in for the world’s drug-addled and criminally dispossessed. Not to mention female FBI agents charged with obscenely silly lines that work, at least in this universe: “It happens sometimes. People just explode. Natural causes.” Sense and sensibility this isn’t.