Repairing to The Repair Shop 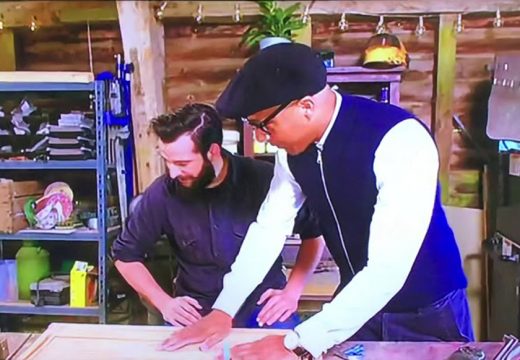 And who says it can't be fixed?
T

he Germans probably have a lengthy compound word for that feeling you get when an engrossing TV series or book comes to an end.

If not, it’s time to coin one. It should combine “angst” (anxiety), “geist” (spirit) and the already apt German word for television, “Fehrnseher,” which is a compound of “far” and “see.” This new word could also include “hunger” (the same in German and English), because the feeling in question is akin to hunger so intense you can’t decide what to eat and fear you’ll be let down if you make the wrong choice. To this word, I’d add “Götterdammerung” (“twilight of the gods”), or the end of the world, because when a good series ends, it also takes down the imaginary world where it took you for hours, days, if not weeks at a time.

My usual cure for what I’ll call Angstgeisthungergötterdammerungferhnseher (the pronunciation is in your hands) is to watch a predictable and bland placeholder show such as “Antiques Roadshow” until I find something new.

The algorithm may have already had my number: “50-year old woman, likes foreign shows.”

The other day “Antiques Roadshow” was not enough. I needed something new for my dinner hour and began combing Netflix and Amazon Prime — without much luck. Whoever designs the streaming services’ algorithm apparently doesn’t pay any attention to the warning plastered on financial products that reads, “past performance is no guarantee of future results.” The algorithm may have already had my number: “50-year old woman, likes foreign shows, not too much violence, no historical errors, strong female leads who are not mean, and both world wars without too much guy weaponry.” But it couldn’t divine my current mood.

For that, I probably needed a wine steward. “Yes madame. You chose the leftover lentil soup tonight? An excellent choice. May I suggest an episode of ‘Endeavour’ to go with that? It has a hint of oak and leather mixed with fruity notes, which goes well with crime-solving in Oxford in the 1960s.”

My dinner was almost cold when Netflix figured I’d like the BBC’s “The Repair Shop,” since it knew I had already watched an only-the-British-could-love reality show called “Churchill’s Secret Agents: The New Recruits” in which contestants reenact the selection of Britain’s World War II commandos.

“The Repair Shop” is a reality show set in a thatched barn belonging to the Weald and Downland Living Museum in Sussex. “Clients” such as “Helen from Hereford” (where “hurricanes never happen”), bring wounded family heirlooms to the “shop.” There, specialized craftspeople put them to rights.

“The Repair Shop” relies on several reality show formulae. The cast is a microcosm of British types. The show’s host is furniture restorer Jay Blades, who combines the mixed-race good looks of multicultural modern Britain with the patter and tortured consonants of a 1940s tradesmen. The ceramic restorer, a rare female on the “shop” staff, has the deceptively quiet air of the village’s lady sleuth. The clock guy is James Bond’s Q in a tweed vest.

“The Repair Shop” celebrates Britain’s pride in being the country in which trainspotting was invented. You can sense a smug satisfaction that there are actually people who earn livings restoring firefighting memorabilia or accordions or bring in one of 205 garden gnomes for repair.

“The Repair Shop” is not a competition, like some shows of its kind, but it does not lack in suspense. Can the music box repairer keep a steady hand while he straightens the cylinder’s pins? Will the host who is handling the newly-whole ceramic jug created by a friend of Picasso’s drop it?

“The Repair Shop” celebrates Britain’s pride in being the country in which trainspotting was invented.

The “big reveal” is a reality show standard, often with a touching story such as a surprise house re-modeling for a family that was flooded out. On “The Repair Shop,” a family gathers to watch granny’s reaction when she hears an old song on the now-restored accordion she played in London bomb shelters during World War II.

“The Repair Shop” has some messages. One is the power of objects to keep memory alive and to link us to our past. Another is that worth is not the same as value. None of the objects brought to the shop would break records at an auction. But all are priceless for their owners.

However humble the broken jug or battered desk to be repaired, their restorers ask the same kinds of questions as those at work on the Sistine Chapel or Notre Dame. Should we see the restorer’s hand? Should something be made “new” or still show its age?

“The Repair Shop” feeds Brexit-style nostalgia for an imagined past when all shopkeepers were friendly, child labor didn’t exist, and work was done with safe tools and materials. “Repair Shop” also satisfies a deep human need to see things heal, whether they are patients on a hospital show or Aunt Mary’s piano stool.

On a personal level, “The Repair Shop” reminds me of watching my surgeon father suture the amputated ear of my plush rabbit or repair a pan my mother hated to throw away.