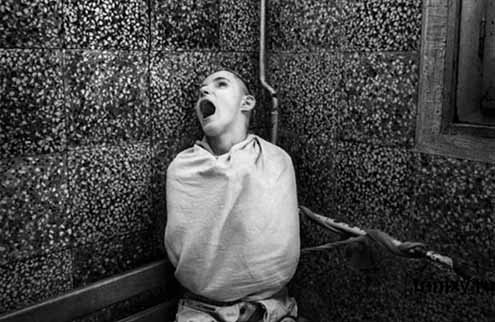 A photo taken in a Serbian psychiatric hospital by George Georgiou who worked in both Kosovo and Serbia between 1999 and 2002.
&

#8220;Bless you,” one of our lecturers told me when she heard I’d asked to spend part of my six-week psychiatry rotation in the psychiatric emergency department (ED). I understand all too well why the psych ED is a place many people might want to avoid. Many patients in this locked unit are acutely and severely ill. One patient might come in talking about hanging himself, another of how how voices are commanding her to kill people. An ambulance might bring in someone found found running down the street in undergarments. A handful of these patients can turn aggressive or violent, yelling and threatening to harm the physicians and other staff.

Most can usually be talked down but some require sedation via an intramuscular injection — and in a few cases physical restraints. Safe to say there are few dull moments.

Before I discuss my own response to the psych ED, I want to talk about a tension that generally speaking exists in medicine. I’ll use hypotheticals to illustrate my point. Imagine a doctor sees a hospitalized patient afflicted with a rare, potentially fatal disease.

“Wow, what an interesting case,” the doctor tells a colleague when the patient is out of earshot. The colleague replies, “No kidding, I’ve never seen a case of that before. Let me know what the outcome is.”

This fascination with a rare, possibly incurable disease might seem cold-blooded to a non-medical observer. What kind of person would say something like that? But medicine is all about compartments. Doctors have compassion for their patients. They care for them to the best of their ability — applying empathy and professionalism. At the same time, they’re possessed with intellectual curiosity about the underlying processes of diseases. Probing pathophysiologic principles is part of the scientific method they’re trained in.

Though compassion and curiosity coexist quite peacefully, all this might sound callous to a casual observer uninterested in these medical compartments.

My years as a medical student have taught me that patients and their families are sensitive to remarks made in passing. Medical curiosity can seem unfeeling. As a result, I’m careful as to when and how I express it.

That preface in mind, let me move on to the psych ED, an assignment I found both medically and professionally exciting. The unvarnished truth is that patients need the service and the service needs a staff. The psych ED is a high-impact place with plenty of patients ill enough to pose an immediate threat either to themselves or others, or both. For a doctor, it’s a high wire act whose reward comes in the form of helping prevent a suicide or bringing someone down from a dangerous manic episode. Plenty of patients admittedly don’t want to be in the unit. Some refuse medication and protest their hospitalization. But even in such precarious situations, you’re still providing patients with short-term safety.

The psych ED encouraged me to use both my journalistic and my medical training. Skepticism is essential in any kind of psychiatric work. Some patients will lie and behave manipulatively. They’ll do whatever they can to get out of the hospital, or remain inside. Others will try to lie their way out of medication, or into it. Part of the history-taking process includes gathering what’s called “collateral information,” which involves calling around — psychiatrists, therapists, social workers, and internists — to verify a patient’s details. With permission, we’re also allowed to get in touch with family and friends to get the fullest possible portrait of the person, assess his condition and safety, and create the best treatment plan. The number of phone calls and the tracking process can revive old investigative journalist training. You doggedly hunt down clues, refusing to back down when one lead dries up. Persistence comes in handy.

As a medical student, I’ve spent a significant amount of time with patients themselves. Once a patient is safe and secure, students are often tasked with conducting the initial psychiatric evaluation. They then present their findings, assessment, and a proposed plan to the resident and attending, afterwards writing up a note about the encounter.

This sense of teamwork, of contributing to hourly and daily goals, is uplifting. In other clinical environments, my work was duplicated — often in front of me. I’m a student. Obviously, some of my moves require double-checking for safety reasons. That’s normal. But the duplication often left me feeling redundant.

In the psych ED, when I called the patient’s psychiatrist, I wrote a note about the conversation and then presented my findings. If I missed key information, I called the doctor back. My work wasn’t repeated. I felt more trusted, more competent. Having spent a decade working in publishing, I’ve missed both the trust and the sense of competence.

There have been many challenges. The psychiatric patient interview differs from a standard medical evaluation. In the case of suicidal patients, for example, it’s essential to ask whether they have access to a gun at home. That’s not a typical question in other disciplines.

It’s a delightful combination — to feel both challenged and effective on a daily basis. Most important, I feel like I’m making a difference in someone’s life.