Rentals in the afterlife 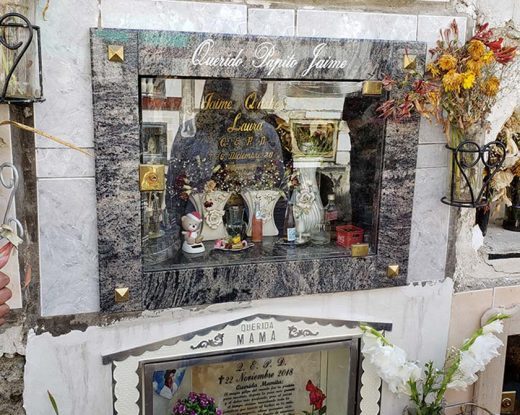 Bolivia's largest cemetery, the Cementario General in La Paz, gives its "tenants" a five-year lease, enough time to pass into the next life. Author photos.
I

hope to arrive at my death late, in love and a little drunk. • from the writings of ancient Greek philosopher Atticus

Travel often permits the voyager to visit romantic beaches, scale imposing mountains, look over vast oceans, and revel at impressive structures. It can also give the visitor a rich taste of exotic foods. What it cannot do is cancel out the reality of death.

Death is everywhere and timeless. It pays no attention to neatly thought out vacation plans.

I had my first exposure to death while traveling decades ago. I was 19 at the time, and visiting Switzerland. I’d made my way past Interlaken and into the Alps, to the hamlet of Kleine Scheidegg, nestled in a ring of mountains known as the Bernese Oberland. After staying at 50-cent hostels for weeks, I decided to splurge for a night at the Hotel Bellevue des Alpes, a gorgeous inn not far from the town of Jungfraujoch, located high above, and Grindelwald, situated below.

In Bolivia, Pachamama, or Earth Mother, is believed to control all life and death.

On this particular June afternoon, visitors were busy using binoculars or the one-franc coin viewer on the deck to watch the progress of two ambitious climbers hanging parallel to one of the most dangerous mountain slopes in the world – the north face of the Eiger (made even more notorious by Clint Eastwood, in the 1975 move “The Eiger Sanction.”).

But they were not watching a movie. The climbers died, though I never learned how they died.

We sat, some of us in deck chairs, watching them sway in the alpine wind. Humans can be strange that way.

Many decades and many (occasionally dangerous) travels after that lurid day, I found myself standing in Bolivia’s largest cemetery, the Cementario General. Death is a multi-million dollar business the world over, and La Paz is no exception. With surprising efficiency, the government — if paid the necessary fee — cares for and later processes (yes those words are in the correct order) up to 50,000 bodies a year.

Though death seems ubiquitous in Bolivia, the people there embrace it with a sense of humor lacking in other cultures.

Take the story of 19th-century patriot Pedro Murillo, who has a plaza named after him in La Paz. In the early days of 1810, both Bolivians and occupying Spanish forces grew (separately) wary of the potential consequences of the Murillo-led Bolivian independence uprising. What then to do? How about yanking him from the movement’s headquarters at the presidential palace, dragging him around a park, then lynching him (and a few sympathizers) from a lamppost? And that’s what happened.

The cemetery art is morbidly fantastical, with smiling, cigarette-smoking skulls.

But once the deed was done Murillo’s killers began to have misgivings. However, there was no going back, so they apologized to his widow and placed a bust of him on the lamppost. It still stands, functional, but, not surprisingly, crooked from the leader’s deadweight. Murillo is now a national hero whose death is honored annually.

Some government buildings in the same park through which Murillo was dragged have bullet holes from a recent skirmish between national troops and local police. The battle broke out after the two sides disagreed about who should be paid more. A kindly Cholita told me in all seriousness that the dispute had actually broken out over a parking space. I cannot confirm or deny this.

A half hour’s walk away, the witches’ market thrives, though it is smaller than the one in the Andes city of El Alto. Witches’ markets sell such useful items as naturally aborted fetuses of llamas and other animals. Buyers take these to local shamans (men and women), who allegedly have the power to communicate with Pachamama, or Earth Mother, who is believed to control all life and death. Want a better job, a newer car, your nosy next door neighbor dead? The shaman will burn your sacrifice on a grill, and let you know if Pachamama has granted your wish. “Better luck next time” generally means you have to pay twice.

Longstanding rumors suggest that to sanctify and protect new buildings, shamans may go so far as to sacrifice humans to Pachamama, burying the bodies in the cement foundation blocks of the buildings. While such stories have some basis in history, modern Bolivian law prohibits the practice, though many swear it remains. It’s suggested most of the sacrifice victims are street people, the homeless, and drug addicts, in essence anyone organized society “would not miss.”

But the Cementario General seems to concentrate death as no other place can. It is like death’s condominium complex. Since burial land is at a premium, families rent – not purchase – a plot. Most are just large enough for a single coffin, but five can be piled up, one atop another. The result is row after row after vertical row, like coffin buildings. It is considered a great honor to be chosen to make art for the complex. These are usually, but not always, paintings, one for each stack of graves. The art is morbidly fantastical, with smiling, cigarette-smoking skulls. Others portray people dying on steaming piles of bones, or lesbian angels embracing over corpses. Dozens of new paintings appear annually over the cemetary’s 210 acres, believed to contain the remains of some two million corpses.

But a rental is a rental, and you only get a five-year lease.

Graves are stacked one atop another with both tombs and walls decorated by parents and relatives.

Largely because it takes five years for the dead to find their way to their next station, wherever that may be. Over the course of these five years, affluent families decorate the tiny porticos with faux columns and ornate French facades. They populate small glass-encased vestibules with items meaningful to the deceased, everything from Coke bottles and laundry detergent to miniature rocking chairs and television sets.

When the five years end, the rent is due and a notice is posted that informs all passersby that failure to pay their condo fees will mean eviction. The remains will be extracted and discarded, which is fine with the families. Certainly the deceased will have found their way by then.

Why pay the bill at all?

At this point things get more interesting.

Though all the condos are cleared and the bodies discarded (usually burned) to make way for new residents, what isn’t thrown away are the skulls.

Fail to pay up and the skull is in limbo.

And skulls are revered (and sold) as Natitas, “skulls of the dead,” and Bolivians have them in their homes to protect their families and belongings from evil. The Natitas are often decorated with hats, sunglasses, with some even putting diamonds in the eye sockets. Google Natitas and you’ll be amazed.

For as long as I can remember, I’ve thought cemeteries as wasteful as golf courses. Still, as cemeteries aren’t going away anytime soon, it’s nice to see that some cultures not only have an artful sense of humor about death, but also approach it practically. A five-year lease and skull recycling: the world could use more of both.