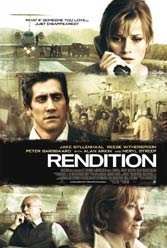 Gavin Hood’s earnest anti-torture movie, conceived as a Hollywood response to the very bad things terrorist-threatened governments do in the name of national security, is crippled by maudlin, meddling soundtrack takes to woe like a squirrel to acorns. In a nutshell (and a complex nutshell it is), Egyptian national and longtime U.S. resident Anwar (Omar Mewally), a gentle man married to a wholesome, eight-months-pregnant blonde (they already have a son), is summarily yanked from a U.S. airport following a Cairo suicide blast against Egyptian police official Abasi Fawal (Yigal Naor). Anwar’s mobile phone apparently contains numbers linked to a terrorist group out to kill the burly chief. The bewildered suspect is whisked to an Egyptian prison and brutalized based on the policy of “extraordinary rendition,” the neat bit of post-9/11 business that allowed the U.S. to take “precautions” based on inside information.

Meanwhile, Abasi’s Cairo family is cracking open at the Romeo and Juliet seams. His youngest daughter Fatima elopes with a Jihadist who has it in for her father. Drafted into the bloody broth is CIA operative Douglas Freeman (miscast Jake Gyllenhaal), in charge only because his boss was killed in the blast. On the Washington end is Corrine Whitman (Meryl Streep), the amoral CIA top spook charged with spitting ice water, and Anwar’s wife Isabella (Reese Witherspoon), who wants to know what the meanies have done with her man.

Hood’s deadly serious intent is to create an ensemble terrorist morality tale with a generous emphasis on the Egyptian side, including domestic life and betrayal; Hood is South African. But torture and Jihad activities are relentlessly spiked with hymns and flutes. The American pond is little better. Whitman asks Freeman if this is his first “time.” First torture, yes, he replies, to which Whitman says: “The U.S. does not torture.” Never does Kelley Sane’s script rise much above one-liners: “…If you torture one person you create ten, a hundred, a thousand new enemies.”

Aside from Naor, who brings brawny credibility to a world-weary, ruthless Egyptian cop, the character are little more than liberal set pieces. The pertinence of the kidnapping and torture message is loud, clear and telling, the film is not.