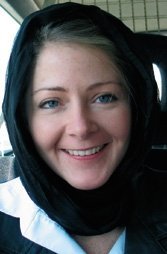 didn’t know Fern Holland. On a Thursday morning in March, I read that two Americans were killed in Iraq — the first U.S. civilians killed there — gunned down in their car by phony Iraqi policemen. I read this news with the same bleary eye as I read all the sad morning news about the nameless, faceless people dying every day in Iraq. It was memorable because there were phony policemen involved, but the fact that two more Americans died, even though these were civilians, didn’t make much of an impression on me. More gruesome episodes of civilian deaths have followed, and now Iraq is close to a civil war.

Later that afternoon I received an email from a close friend of mine who was shattered by the death of her former colleague Fern Holland.

Fern, 33, was an accomplished lawyer who had served in the Peace Corps and practiced immigration and humanitarian law. Most recently she had joined the coalition forces in Iraq to assist in investigating human-rights violations and in writing the women’s rights section of the new constitution. Attached to my friend’s e-mail was a news article, the same article I had just read that morning about the nameless murdered U.S. civilians. Fern was one of those two U.S. civilians — in Iraq as a civilian employee of the Coalition Provisional Authority to help build a democracy for the Iraqi people — who had been hunted down in their car, chased and shot to death at a fake checkpoint by fake police officers. Her body was dumped in the back of a car and recovered only when the killers were arrested. The authorities now believe that these gunmen were Iraqi police from a neighboring town who followed the U.S. civilians from the Karbala women’s center, although the investigation remains open.

There was a picture of Fern attached — a pretty girl with shining blue eyes and a sweet smile. She couldn’t have known when that photo was taken the fate that awaited her. She had dedicated her life to helping people in need, including going to law school in order to be a better tool for them. She worked for a year at children’s hospitals in Siberia and Africa and considered becoming a doctor.

But according to the Washington Post, which quoted her brother James Holland, she “decided she could do more good by getting a law degree.” And she died, according to her own e-mail sent to a friend only months before her death and which was quoted in the Associated Press, “doing precisely what [she] want[ed] to be doing.”

We all complain that the world is apathetic, that somebody should do something, while most of us sit by and do nothing ourselves. We so rarely have an example of a person so selfless, so caring, so willing to walk the walk instead of just talking the talk, but still a person like every man in so many ways, raised in a typical home in middle-class America. Here is a young girl who had said, according to Steven Moore who worked with her in Iraq, that she had only two passions: her nieces and nephews and democracy. Surely she had other things that would have mattered to her, but her vision for a better world overrode the more typical dreams of a young woman.

According to the Washington Post, she joined the Peace Corps because “she

Before she left for Iraq, she was struggling with working for a traditional law firm when her passion was human rights and refugee issues. While in Iraq, she eschewed additional security for herself although she knew that she was an easy target. She didn’t want the Iraqi women she was working with to feel put off by guards; she wanted them to be comfortable. And this may have been her most selfless act in a lifetime full of them.

Jacalyn Peter, an attorney who worked with Fern at Conner & Winters in Tulsa, Oklahoma, says, “She had great spirit, was very courageous and dedicated to the underdog. At 5’3″ and barely 100 pounds, she hiked Tibet by herself [and] was a Peace Corps volunteer in Namibia … this is an unbelievably sad ending to her life’s story.”

— By mid-2008, total military and civilian casualties were estimated at more than 1 million.

About the Author: Layne Randolph

Layne Randolph lived in the foothills of the Rocky Mountains in Colorado while she got her law degree from the University of Denver and worked with one of the world’s top law firms as a corporate lawyer. After having her fill of the life of a weekday workaholic and weekend ski bum, she decided to start a solo practice, traveling and working from her laptop computer. She has lived in Buenos Aires, Argentina, Washington, D.C., Florence, and Denver, where she now resides.