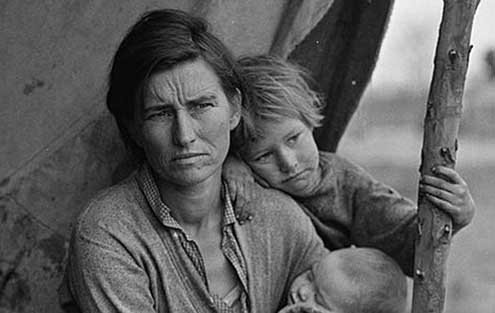 As recently as the 1930s, large swathes of America were abject and filthy poor.
T

he United States is an insular nation bordered on its lateral edges by vast oceans and to the north and south by sprawling states with which it shares only modest affinity.

Most white Americans have genealogical roots in Europe. When they travel, they usually end up visiting London, Paris or Rome — the long-time big three. The more adventurous trek south into the Americas or east to Asia. Determined non-conformists head to Africa, but their numbers have diminished considerably since September 2001.

Unlike the colonially-infused British, still influenced by the lingering vastness of their messy fallen empire, Americans prefer places that as much as possible offer them the middle class comforts of home, which now include Wi-Fi and functioning air conditioning in the summer. Rumors of contagious diseases send them into fits. Undeterred adventurers, minus evangelical missionaries, usually come from urban centers. Some are new Americans visiting ancestral homes. Others are natives who enjoy the “liberal” plunge into destitute nations, saving babies (if not seeking them) in Bangladesh, Chad or central Africa, or volunteering to help in earthquake zones (Haiti’s unimaginable 2010 quake killed at least 100,00). Their forays into poverty-stricken countries earns them hearty applause among local humanitarians, and even cheers from folks back home — so lone as their efforts, and the subjects of the efforts, remain far away.

Ironic, this visceral dislike of the “too” foreign, since Melting Pot America was itself an integration project made successful and robust thanks to millions of immigrants in particular from Ireland, Russia, Germany and Italy. The arrivals from places 19th-century nativists imagined as poverty-stricken cesspools soon became certified citizens. The country’s slave population, most of it from West Africa, gradually acquired its own, if still fragile rights. This celebrated taking in of the tired, the poor and the oppressed — a noble if chaotic attempt at democracy — helped shape the early values of a nation.

But when the shaping ended, middle class affluence firmly functional, parts of the once-tolerant core grew hedgehog-like, turning into a spiny ball at the tiniest hint of threat. Big cities – New York, Chicago, Los Angeles, Boston – continued to beckon the world, getting the best and worst of new ethnic arrivals. But the hinterlands found no joy in the welcome mat. They worried about jobs, about looks, about the menace posed by interlopers. Some even worried, albeit in a murmur, about the presence of a black man in the White House. Slowly but surely came nostalgia for the frontier mentality. The 2001 terrorist attacks only upped the ante, with the then-president and his lieutenants preaching a doctrine of the dire. Over the first decade of the century, insularity regained a working foothold in pop culture.

Yes, there was still London, Paris, and Rome, but they too were seen as besieges by heathen outsiders. Beyond Europe, the known world seemed to dissolve into the likes of Yemen, Afghanistan, Iraq, Pakistan, Syria, and literally godforsaken states seen not as real nations but as incubators and disseminators of human puss.

When Donald Trump ventured into the subject of immigration, bemoaning America’s absorption of people from “shithole” countries, he did little more than articulate the uglier side of an America that, in its affluence, has imagined itself as the sum of its “true” natives. Ironic yet again, since aside ffrom the Sioux and the Comanche (and countless others) — most exterminated by U.S. troops as part of 19th-century “civilizling” expansion — no such absolute natives any longer exist, at least not in significant numbers. This caveat gives America unique license to reinvent itself as it goes along, abridging its own memory of itself, and forgetting the rest. It has a Constitution yes, but no tablets or scrolls conferred by forefathers that encourage the continuance of some ancient wisdom.

Americans came into existence from elites and cesspools the world over. The often semi-legal dagos and wops, micks and paddys, limeys and krauts, niggers and chinks — they were the great unwashed, the toiling, oppressed but ultimately trustful folk that built the country (and rebuilt it after 1919) and whose mistrustful forebears now take the word of an overripe president who says he’d prefer avoiding shitholes when he shops for new citizens, if in fact he shops at all. It’s the prerogative a president who too often resembles a dark caricature of a blow-your-stack Disney cartoon, and the prerogative of those inclined toward the trendy, ear-splitting rancor of exclusion. It should not be the nation’s prerogative, not in the long haul, lest it forget the outhouse population that forged it.