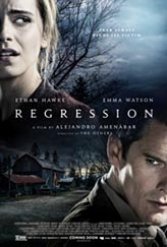 It’s 1990 in the fictional city of Hoyer, Minnesota. Hard-boiled detective Bruce Kenner (Ethan Hawke) picks up on a case of sexual abuse involving a teen girl, Angela (Emma Watson), who’s sought refuge with her priest. Her jailed father contritely admits the crime but mysteriously remembers nothing. Alongside local professor Kenneth Raines (David Thewlis), an expert in regression therapy, the humorless and skeptical Kenner comes to believe Angela’s story: that she the victim of a devil worship cult that included her family.

Early on, Alejandro Amenábar’s movie doesn’t have a subtle bone in its body. Kenner’s remarks — “I just get a feeling with this case…” and “It’s a part of something bigger, much bigger…” — spike the satanic punch. The more Kenner digs, the more he’s smitten by the occult. He gets strange phone calls. He’s haunted by nightmares. The priest warns him he’s up against evil. Satanists seem all around.

But “seem” is the working word. In fact, this is a story about the perils of paranoia, hysteria and collective suggestion. That story might have had promise (in the vein, say, of Gregory Hobbit’s 1996 “Primal Fear.”), but Amenábar runs so straight and has the feel of a hastily arranged afterthought. Watson’s Angela and Thewlis’s professor are sacrificed to give Hawke his space, too much space. Does Satan exist? It depends on whether you include manipulation as a ritual.

Based on events in Jordan, Minnesota, where in 1983 a number of children accused family members of satanic cult-driven molestation.