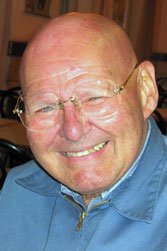 It means “I saw a beautiful book about art. I suggest that you buy it for yourself.” But Professor Reggie Foster has no interest in driving up book sales. He wants merely that you understand him in his beloved Latin.

Foster is among the world’s foremost Latin scholars, a dwindling breed of men and women dedicated to the language that fueled Roman and church society. He plies his trade at the capital’s Pontifical Gregorian University, an institution managed and funded by the Roman Catholic Church. During an academic year, Foster teaches five different “experiences,” or classes.

The 67-year-old Foster, a native of Milwaukee, Wisconsin, hardly looks the part of priest and scholar. He often wears what looks suspiciously like a mechanic’s jumpsuit and strolls around the Vatican and the Janiculum Hill carrying a stainless steel suitcase. In it are worksheets that contain excerpts from seminal Roman and Renaissance writers and poets, including Cicero, Caesar, Ovid, Janus, Quintillion and Erasmus.

So popular and globally known are Foster and his Latin-teaching methods, that students seek him out by name. He does not require students to memorize declensions or repeat tenses, a hallmark of most Latin teaching. Instead, Foster has his students reading and reciting Latin, an Indo-European tongue, from the first day of class, rarely allowing them to lapse back into English.

Foster is an old-school enthusiast. Don’t even think of telling him Latin isn’t relevant in the video age.

He and his fellow church Latinists speak only in their “mother” tongue while at work. “We talk about everything in Latin, our problems, our hobbies,” he says. “People still communicate in Latin. In fact today I wrote two postcards in Latin.”

Although the Second Vatican Council, known as Vatican II, largely abandoned the so-called Tridentine (Latin) Mass in 1964, the landmark decision had little effect on those working within the church. The Vatican uses Latin on its official documents and in most liturgy. The Vatican bank, the Institute for Religious Works, has several ATMs inside Vatican City, and they have a Latin language option.

What distinguishes Foster is his year-round industry. Throughout the summer, for example, he teaches advanced students, many of them high school Latin teachers, for five hours each day for eight weeks. The course, held at the Divino Amore School in Monteverde Vecchio, is free — for love of language, says Foster — and class size averages around 50. Although he tries keeping all his speech in Latin, he switches into English “every once in a while to keep it light. It’s no walk in the park.”

Foster, however, doesn’t appear to love easy things. He promotes Latin as essential to a full understanding of Western literary canon, and therefore to all Western culture and literature.

“The line, the continuity, the filo, the wire that is holding this whole thing together is Latin, whether you like it or not,” he says. “When you go through the different ages of the Western world, the classical period, the Middle Ages, the Renaissance — Cicero, Ovid, Thomas More, Erasmus — it’s all sitting there in Latin.”

“The battle that Reggie Foster is fighting … is to help students to understand how important Latin is for them to understand their own language and culture,” says Paolo Marpicati, Foster’s fellow Latin teacher at the Gregorian. “Translation is the tomb of understanding. …”

Isaac Newton’s “Principia Mathematica,” which described gravity, was published in Latin in 1687 — when English was still a growing, not universal, tongue. Queen Elizabeth I was said to have spoken Latin fluently. The poets Milton and T.S. Eliot often noted their debt to Latin.

The language, Foster says, seduces his students. “There’s … a mentality, there’s a feeling, there’s an expression, and there is soul here, which is Latin! … We’ll do different authors, Vatican II documents, this pope; then we’ll go back 1500 years to Leo the Great. And [the students] say, ‘With this Latin, I just feel at home with all these people.’ And without it, you are out in left field, you are just standing there like an idiot!”

By all accounts, his students adore him. Anne Therese Gardner, 23, another Milwaukee native, says Foster’s teaching method combines “an obligation to the human race and a prowess that must be displayed” so the language is not lost.

But he is not a fanatic, she insists, citing examples of paternal compassion for students and an awareness of the rigors of university study. “One time he told this young man that he would give him €100 if he would quit the [Latin] class because he was overloaded,” says Gardner. He is, she adds, sweetly practiced in “the soul-tending arts.”

Foster moved to a Carmelite seminary in rural Peterborough, New Hampshire. There, he heard his teacher speak Latin in class. “That was it, I fell in love with the thing,” he says. “And I said to myself, besides being a priest, I want this to be my vocation or my activity.”

He arrived in Rome in 1962 to study at the Teresianum, the Carmelite order’s international college, and returned to specialize in Latin at the Salesian Pontifical University. Fate intervened in 1969 when Pope Paul VI’s Latinist fell ill, the Vatican called him to work in the church’s Secretariat of State as a Latinist. He was only 29. Now, 35 years later, he’s still part of a team that translates papal documents. “I’m still going,” says Foster.

Now then, about that art book.

Father Reggie Foster’s summer class runs eight weeks from early June through July 31. If you’re interested in learning Latin from Foster in the summer of 2005, send him a note at: Piazza San Pancrazio, 5A, Rome 00152. Applicants will receive an information packet and an entrance exam. They must answer Foster’s questions and mail them back — no, not email. In regal script, Foster handwrites every note he sends to successful applicants, using different color ink to personalize the notes. He is often sighted at the Vatican post office sending out correspondence.

About the Author: Susanna Pinto

Susie Pinto, a Chicago native, studied Classics at Northwestern University. After graduation, she worked for the Trade Commission of Spain (ICEX) as a market analyst promoting international commerce. In 2002, she moved to Rome to work for the Vatican Information Service in the Holy See Press Office. Pinto’s interests include romance languages and Indian cinema.