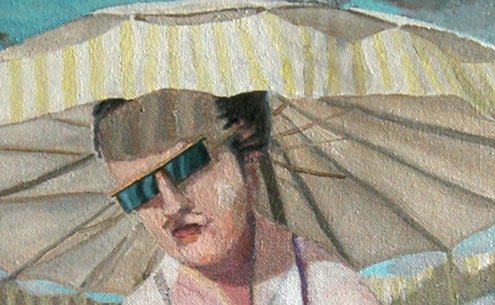 Bernard Le Huche's apartment is awash with the colors of his paintings.
I

n an inconspicuous corner of Tuscany’s south an artistic movement is taking shape. The movement is typically Italian, languid and spontaneous, the product of an unlikely friendship between two artists who aren’t tied by style, age or even nationality.

Piero Bonacina is a Milanese with a perchant for carving 100-year-old oaks into sculptures so fluid they look like they’ve been melted into shape. Bernard Le Huche is a Frenchman so pensive you’re sure the best conversations he has are inside his head while his hands paint watercolor landscapes with finesse you thought had surely died with Monet.

As he layers delicate color over delicate color, Bernard’s hands shake with the effects of multiple sclerosis. He can only paint in short bursts, persevering until he can no longer hold his brush still enough to get the tiny strokes that are his life’s joy. And yet, Bernard’s whitewashed apartment is flooded with the colors of his paintings. They hang in pride of place, watching over the ones that repose by the door in anticipation of their generous patrons.

Bernard is the real star of this story. His determination to paint is an inspiration without the need to embellish. But you can’t tell his story without Piero. The infectiously amiable Milanese was the first to arrive in Southern Tuscany, buying a small 19th-century palazzo in Montegiovi, not far from the coastal city of Grosseto.

Piero’s house is perched on the very edge of the hilltop in a part of Italy known as the Maremma. It’s a territory that bears the immortal scorn of Dante Alighieri in “La Divina Commedia,” and whose name doubles as a blasphemous swearword in Italian, but whose landscapes have become nouveau destinations for those who want to see Tuscany sans tourists.

The warmth of this Tuscan sun eases Bernard’s nerves. He could have joined any artist’s enclave anywhere in the world, but the isolation of Montegiovi is a comfort to him. He says its better to be in a small town where everyone knows about your condition then to be in the grandest streets of Paris where people think you’re drunk.

From the second storey window of his tiny apartment, Bernard can paint the undulating hills of Tuscany, the turbid depths of the Tyrrhenian Sea or the red and orange wash of landscapes he has only seen in his head.

Outside, Piero potters away at his latest creation. His sculptures have featured in galleries from New York to Paris to London, but now he tenderly, if a little haphazardly, displays them all in his garden gallery, Arte e Parte, which is open to visitors all day, every day.

The pieces are the chronicles of more than 15 years and include Piero’s take on the 9/11 World Trade Center attacks, the undefined tenderness of community and the simple pleasures of nature’s bounty.

To locals, Piero is a carbon copy of the clichéd artist, eccentric with a graying ponytail and overalls. The harsh bite of the varnishing oil he laves over all his sculptures clings to his skin. But he is gentle and kind, quick to befriend and humble enough to invite a stranger to help him finish painting his latest oak sculpture.

Bernard is treated with a touch more curiosity and the pandering sympathy that comes with knowing someone is fairly unwell. His stunted Italian has nothing to do with lack of fluency and everything do with his illness. He is peacefully intelligent, reserved with his affection, but free from bitterness or regret.

Bernard studied at the École nationale supérieure des Beaux-Arts, where he learnt from the masters, both living and dead. He clings to an artistic style that is antiquated, yet sorely missed, mostly by those who have no patience for postmodernism. Even after he was diagnosed, he never considered putting away his paints. Instead he found another inspiration to accompany his Impressionism: Buddhism and a fervent belief that he will one day be at peace with the concept of samsara, life’s regeneration.

Montegiovi is a place as good as any to ponder this cycle of life and suffering. The artists are within arm’s length of Tuscany’s only Buddhist monastery, Merigar.

It’s the lucky among us who can clearly see what brought them to stand in the spot they stand in today. In Bernard’s case it’s this 30-year-old monastery, and it’s a sentiment he shares with Piero, who is also Buddhist.

If Merigar decided to move they would probably have gone with it, in the beginning. Now Piero and Bernard are preoccupied with their artistic movement. Their dream is to bring more artists to their Palazzo delle Artiste and transform inconspicuous Montegiovi into a Tuscan Montmartre.

In the meantime, they’re content to share even the smallest sliver of their artistic passion with those who can’t paint to save their lives, but are inspired by the way Piero and Bernard transform the world into something far more beautiful than the reality before them.

— The Giardino d’Arte di Piero Bonacina is at Loc. Montegiovi near the town of Castel del Piano in the Grosseto province about three hours north of Rome. You can arrange a visit by phoning +39.056.969602.