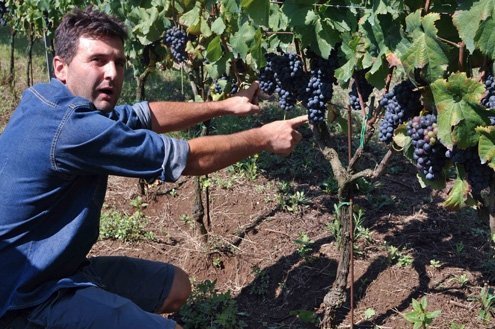 hen I share a meal with family and friends, I often ask them which Italian wine they like best. Many will mention a red from Tuscany, most likely a “super Tuscan,” a 1980s term for Tuscan red blend that uses wine grapes not indigenous to Italy, including Merlot, Cabernet Sauvignon and Syrah.

When I suggest a Lazio wine people tend to look dazed and confused, never mind the arched eyebrows when I bring red wine — specifically the Cesanese grape — into the conversation. Lazio does have some identity problems. It’s a somewhat indistinct central region that has long been overshadowed by more renowned neighbors Campania, Tuscany and Umbria. Many visitors to Rome aren’t even aware that Lazio is the region that the capital calls home. In fact, Rome’s importance as a capital can make it feel like landlocked island enclosed by the GRA, its ring road. Few think much about what lies beyond. But leave the sprawling city behind and you soon enter rolling hills speckled with olive groves, orchards and vineyards. These are the Lazio heartlands that host Cesanese, a variety whose roots date to the Roman Empire.

Cesanese has faced an uphill battle to distinguish itself, not helped by Lazio’s longstanding reputation for mass-producing cheap, neutral tasting white wines. That some of those Lazio whites washed up on American shores didn’t help.

Though Lazio is a white wine bastion, the region’s dry, warm weather combined with the ample presence of red volcanic soil make it ideal for reds. The good news is that some Lazio wine makers have finally turned the corner from quality to quantity, improving the region’s overall wine culture while adding a host of reds.

Cesanese has become to Lazio what Sangiovese is to Tuscany, arguably the region’s most important and delicious red grape variety. Most of the best Cesanese wines come from vineyards near the Lazio towns Anagni, Olevano Romano and Piglio.

Piglio’s winemaking history dates back to the first century BC. Its wines later became the favorites of popes Innocent III and Bonifacius VIII. But that early Cesanese was sweet and sometimes fizzy. The modern version, in contrast, is typically dry and fruity with smooth tannins and blueberry, mulberry, violet and juniper aromas. The best pairings include heavy dishes, such as pasta alla amatriciana, coda alla vaccinara and abbacchio (lamb) stew.

Slowly but surely, I’m beginning to bring my friends around. For wine lovers who want to taste and see for themselves, I’ve chosen some Lazio vineyards I think are worth visiting. I based these choices both on the quality of the wines and their diversity. The list includes historic estates as well as small biodynamic wine producers.