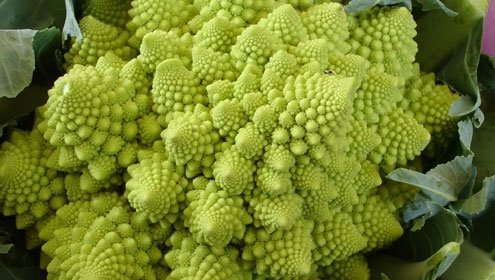 Extraterrestrial-looking spikes that can look like geometry class fractals
S

ome gentlemen prefer blondes. Others pick brunettes. But there’s always room for a fiery redhead. Broccolo Romanesco is that redhead. It comes around briefly in fall and represents an intriguing alternative to the broccoli-cauliflower norm.

Broccolo Romanesco, which is closely related to cauliflower, belongs to the Brassica family and is part of the mustard genus. It also includes Brussels sprouts, broccoli, kale and various kinds of cabbage. It grows best in temperate zones and first appeared in Italy in the 1500s.

While Thomas Jefferson planted it at his Monticello estate in the 1780s using Italian seeds, the United States really didn’t get around to eating the plant until the 20th century. Despite an unusual appearance — extraterrestrial-looking spikes in fractals straight out of a geometry class – its nutty flavor can provide a nice addition to fall’s cornucopia.

But it can be finicky to make.

Cook it too long and the plant becomes mushy, losing most of its flavor (like broccoli). To avoid pitfalls, think short: sauté quickly, steam lightly, boil briefly, or roast for a few minutes at most.

If you take the sauté route, it’s delicious with olive oil, garlic and salt. If you like things hot, add chili pepper flakes or spiced olive oil to the mix.

But steaming best preserves the original flavor. Put an inch of water in a pot large enough to hold the entire plant, bring it to a roiling boil, add the Romanesco, and cover for about 10 minutes. Remove it from the pot and let it cool for a few minutes before slicing it up and eating it plain or with a few drops of olive oil.

Boiling is best for a pasta dish (see the recipe below). Chopped into small pieces it only takes about five minutes to cook through. For best results, cook the pasta in the same water used for the Romanesco.

As for roasting, heat the oven to 230C (450F) and chop the head up into about 1/2-inch pieces. Toss the pieces with olive oil and diced garlic and spread them evenly in a shallow oven pan. Fifteen minutes later (turn them over half way through) and you’ve got a nice side dish. Sprinkle them with grated Parmesan and you’ve got a great one.