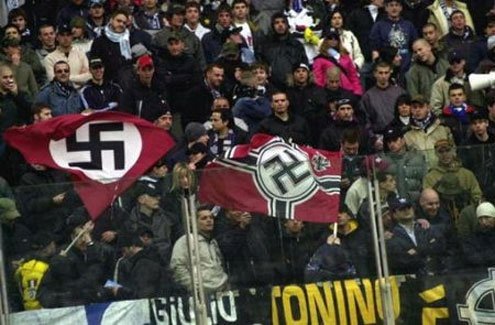 or four years I’ve been living and adapting to life among Italian contradictions. My adjectival use of fascist and communist is a great example. It’s not unusual to hear me say, “Let’s have a drink at the communist bar.” Or, “Look at that fascist building.”

Italian history explains the relationship between communism and fascism in terms of extreme opposites, especially immediately before and after World War II. Italian fascism was a key part of 20th-century authoritarianism, while the strong postwar Italian Communist Party (PCI) became the second largest in the West and challenged for political leadership in 1976.

But my interest lies in how these old loaded ideologies play out now, in daily speech.

For example, I am confident in the statement, Bracciano is a communist town while Formello is more fascist.

Among Rome’s nearby towns, I know Bracciano and Formello best. The “feel” of the two is as opposite as my feelings towards them. Associating each to an ideological belief would help explain my preferences. But am I right?

Both Bracciano and Formello boast a picturesque centro storico, but similarities end there. Bracciano is larger and farther from the capital, connected by train. Formello is a suburb accessible by car. Traffic clogs the Via Formellese cutting through town, while Bracciano’s center bustles with pedestrians. Their communal piazzas are worlds apart: in Formello, the car takes center stage; joyful cries of children punctuate the roar of rush hour. In Bracciano there are more parks, benches, trees.

But can I consider one town fascist and the other communist based on abhorrence for Italian traffic and a fondness for public spaces?

So I Googled each town based on political equivalencies. A search for “Formello Casa Pound” (the youth organization that calls itself the non-conformist right or “third millennium fascists”) revealed an undeniable presence. Since its founding in 2003, Casa Pound — named after American poet Ezra Pound, who supported Mussolini and claimed usury was the root of modern evil — has spider-webbed through Italy, particularly in the center and south. Bracciano also has a faction, just not as visibly active as its Formellese equivalent.

Another connection between Formello and fascism is its football team, S.S. Lazio, whose practice facility was relocated there in 1997. It’s a near-indisputable fact that Lazio supporters lean to the right, sometimes to a radical right. Formed in 1900 by military officers, Lazio was Mussolini’s favorite team.

Then I Googled “Bracciano Partito della Rifondazione Comunista.” Rifondazione Comunista is a small hard-line Communist Party that was formed when the PCI disbanded after the Soviet Union fell. Support for the party, which is no longer represented in parliament, is strongest in the regions of Lazio and Tuscany. In Google’s first results was an aerial photo of Bracciano’s centro storico ringed in red, flaunting the party’s logo. Unsurprisingly, Rifondazione Comunista vis-à-vis Formello resulted in zero.

Now I can get back to those “feelings.” As I walk through Formello to buy groceries, I worry about getting hit by a car — as I always do in Italy. But as frustrating are the chain supermarkets dominating the grocery scene: there is no local variety of pasta all’uovo, no competing macellerie or alimentare. The absence of local vendors in a small Italian town is a symptom of a weak, non-self-supporting center; it’s like taking lungs out of a body and going on a respirator. I’m sure there exists communal camaraderie somewhere, but as an outsider, Formello depresses me.

Bracciano does the opposite. The best illustration is a meal at Da Regina. Regina’s son, the waiter, is also a capellone (a “long-hair,” a word once used to describe Communist youth). Regina stubbornly insists in listing her prices in lire and adjusting the euro accordingly. This means you can eat a three-course meal for nothing. You also leave wondering how she makes money.

Inside the restaurant that is actually Regina’s living room, there is a bustling diversity, all stratums of life gather here, relatively well-off to country hicks, stranieri and sometimes immigrants. Non-Europeans are commonly seen in Bracciano, in the streets, piazzas, schools, while in Formello they are eerily absent.

One could make similar comparisons between Rome’s neighborhoods. Take for example, San Lorenzo and Prati.

I have two Italian friends who demonstrate the irony of these traditional divisions. One insists he’s fascist by calling the other communist and vice versa. Independently, they’ve said that they wouldn’t talk to the other if they found themselves in the same room. But when I saw the two balding men talking at a party, gesticulating and joking, their differences were erased.