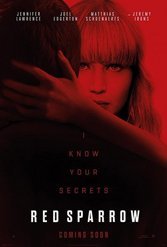 Take a Hollywood mega-star like Jennifer Lawrence and plop her into a sexually charged espionage caper in which she’s a ballerina-tuned-Russian agent and how does her homeland respond? With raves, of course, instantly upping her superstar street cred. But let that picture circulate through Europe and the reactions are more muted. Why? As talented as she is, Lawrence ain’t no Russian, let alone a credible ballerina, and forcing a round peg into a square hole, dubious accents included, can strain even the most staunchly suspended disbelief. This is the burden borne by Francis Lawrence’s “Red Sparrow,” and it’s tangible. The story is conventional enough: an injured, no-longer-able-to-dance Bolshoi ballerina is coopted into her country’s intelligence services, in which, predictably, she’s taught to charm, cheat and copulate with faux gusto, killing when necessary, all the while gleaning enemy (read American) secrets. Lawrence is Dominika Egorova, a Muscovite with an ailing mother who seeks support from her uncle Vanya (roll over, Chekhov). All goes sideways when she inadvertently witnesses a murder and is shipped off to a school for “sparrows,” spies, where she learns that staying alive (and helping mom) depends on skills in charm, porn and assassination. Her plunge into spy-craft will eventually lead her to Budapest, and an American agent (Joel Edgerton), with mayhem, bloodshed and twisted testosterone lighting the path.

But Dominika is ambitious creation. Despite lurid surroundings, she seems more than vaguely complicit in her own chameleon-like corruption. The ambiguity is itself provocative.

Lawrence is peerless as a female screen presence. The pity here is her accent malfunction, a fault shared by her top-flight cast (Charlotte Rampling, Jeremy Irons, Ciarán Hinds), veterans who’ve done “foreign” caricatures for decades. Too often, though, it feels like a Hollywood diva has been asked, pretty please, to do her Russian “thing” for a day. Try she does.

Lawrence breaks no new ground in her glaring, Jason Bourne-like persona: Angelina Jolie, Charlize Theron and Scarlett Johansson have all played gender-leveling female assassins. None were asked to tint their English. Minor point, you say. Maybe. But if you want desperate Russians up against desperate Americans best to support your lead with locals, no more “Hunger Games” make-believe. Director Lawrence, who oversaw three of that franchise’s films, can’t, or won’t.