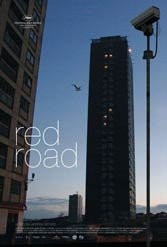 Andrea Arnold’s first feature is superbly deft thriller that examines grief, revenge and compassion. Jackie Morrison (Kate Dickie) works for a private surveillance firm that has hundreds of cameras trained on a crime-infested Glasgow housing complex. She’s dutiful if aloof, lives alone, but still wears her wedding band. One day she sees the face of a man she recognizes as Clyde Henderson (Tony Curran), a recently released convict. Eerily trapped between obligation and obsession, she meticulously tracks his movements as if convinced he’ll return to his criminal ways.

Unsatisfied with just looking, she approaches him, grudgingly befriends him, and even makes love to him (a scene that combines lust and revulsion and demonstrates Arnold’s preternatural sense of sexual ambiguity). As the strange dance between Jackie and Clive plays out, Arnold gradually adds the contextual details necessary to make sense of both menace and mystery. Security cam shots of Glasgow’s destitute outback give the film a melancholy hue that suits Jackie’s mood. She smiles only when she sees pets and their loving owners, as if suddenly pushed backward toward a once-bucolic place. Arnold makes everything add up, never lapsing into improbable gestures or actions.

Dickie’s measured performance is one of few words, and rightly so; Curran’s response is equally deft. Such fiercely focused films, dependent entirely on character development, demonstrate the ongoing importance of stagecraft in the art of making movies.