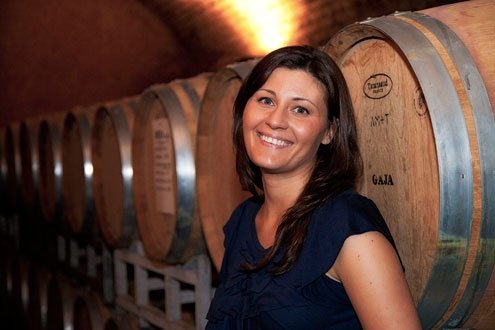 n a foggy day in November 2011, the elegant Gaia Gaja of Gaja Vineyards in Italy’s Piedmont region presented several wines for tasting to a California wine investor and his family at a trattoria near the vineyard. The investor then proudly presented Gaia with a 1961 Gaja Barbaresco, the vineyard’s first vintage of a wine produced under the guidance of her father Angelo Gaja.

The investor’s eyes rested on Gaia as she carefully removed the cork, breathed in its essence, poured the wine into her glass, gave it several swirls, checked the color, smelled the fragrance, sipped the wine and then, with a knowing shake of her head, said “not ours.”

Wine fraud has a tradition as long as wine making itself. This particular sting was the age-old counterfeit “recycling” of an authentic bottle of a valuable wine. The 1961 Barbaresco had been removed by syringe and was presumably enjoyed by the swindler, the bottle then refilled with a lesser wine and sold. A perfect double dip.

A serious wine maker spends a great deal of energy perfecting not only the process of making a superior wine, but also burnishing its name, the bottle and the label. Essential to the wine itself are the location of the vines, with care given to soil quality, altitude, and exposure to the sun. Weather conditions are also critical, depending on the grape varietals being grown. All of it matters, and the end result, consistently achieved and carefully marketed year after year, establishes a vineyard’s reputation.

That reputation becomes a powerful economic asset based on the trust given to the wine by its followers. That trust also depends on combating unfair competitors who, short of counterfeiting, adopt any number of imitative processes to confuse consumers into choosing their inferior wines. Not surprisingly, vineyards seek to protect their brands with ferocity.

Over the years, laws have developed with the parallel objectives of protecting winemakers and consumers.

A classic case in wine law was that of the Bronco Wine Company in California, which once sold “Napa Ridge” and “Napa Creek Winery” brands even though the grapes used in the wines were grown in Lodi, located outside of Napa Valley (the wines were bottled in Napa Valley but back labels said they were “vinted and bottled” in Napa). Authentic Napa Valley vintners were not pleased, filing a suit they eventually won.

Beginning in 1881 U.S. trademark law had been a vineyard’s lone weapon of choice to protect its brand. Only a wine with label markings similar to one with a registered mark could be challenged. Then, in 1976 something startling happened in Paris. French experts did a blind tasting of the best French and California wine offerings. The Californians were judged superior and Napa Valley Stag’s Leap Wine Cellar’s 1973 Cabernet Sauvignon was named the best of the reds.

This historic “Judgment of Paris” put California wines firmly on the world stage. It also strengthened the Napa Valley vintners’ argument that they deserved a higher standard of protection against wines that used the word “Napa” in their names but that were in fact made from grapes grown elsewhere.

This “geographic indication” had been the standard in Europe since 1935 when the French began their system of Appellation di Origine Contrôlée (AOC). It was a way of acknowledging terroir, which in French literally means soil, but has come to signify the totality of the factors that identify a wine as produced from a specific place with unique characteristics. It was also a way to take protection beyond what appeared on the label.

Following the success of California wines in Paris and with added pressure from Napa Valley vintners, the state of California, in 2000, passed a law that barred the use of “Napa” in the name of any wine unless 75 percent of the grapes used for the production of the wine came from the famed microclimates of the region. The concept of geographical indication had made its way into U.S. law and Bronco was soon after compelled to drop the name “Napa” from its labels.

Italy has similar regional protections with its Denominazione di origine controllata (DOC) system, a quality assurance label that says the wine’s authenticity has been “checked at the source.” In 1980, the DOC label became DOCG with the addition of the word Garantita, “guaranteed,” to further support the integrity of the country’s top wines.

A DOCG designation is granted only after a government analysis guarantees that the wine meets strict guidelines from its region or area of origin. The first area given such designation was Brunello di Montalcino. That wine must contain 100 percent Sangiovese Grosso grapes. It must also meet specific yield, aging and alcohol requirements. Finally, all of the steps leading up to its bottling must have been carried out in the area where it’s actually produced. Each DOCG certified bottle then gets a numbered governmental seal over the cork. The system works but it is not foolproof.

In 2008, 20 or so of the 250 Brunello vintners were indicted for cutting their wines with grapes other than Sangiovese. Known as “Brunellopoli” the scandal dealt a major blow to the brand, one from which it is still recovering.

Trademark laws and systems of geographic indication have helped set the bar higher on the quality of wines and the information needed to distinguish between them.

But history also demonstrates that huckstering is a constant. So when a restaurant serves you bottled wine that doesn’t taste like what you ordered, feel free to send it back.