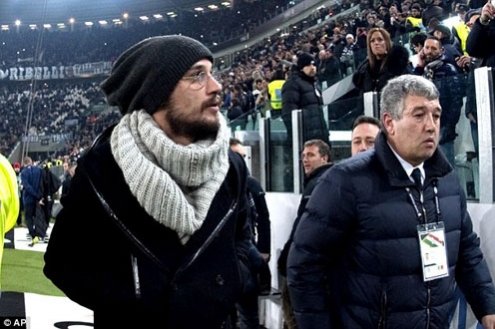 Daniel Osvaldo, left, made few friends in Southampton, and now finds himself with Juventus.
A

s I checked the team-sheets ahead of Napoli’s 2-0 victory over Juventus in late March, there was one name in particular that caught my attention.

Juventus coach Antonio Conte had chosen the undoubtedly gifted but mercurial talent to partner Fernando Llorente in Juventus’ attack. With Carlos Tevez out through injury, Mirko Vucinic returning gradually from a lengthy layoff, and Giovinco out of favor, Conte cannot be blamed for selecting Osvaldo from the first minute. It did not go well. His second-half exit for Montenegrin Vucinic seemed to spark better passages of play across the Old Lady’s forward line.

It wasn’t so much Osvaldo’s footballing ability that had me scratching my head before kick-off but rather that he was starting a game of such magnitude less than two months after breaking a former teammate’s nose.

During a practice match on Southampton F.C.’s training ground, Osvaldo saw the red mist after a robust challenge from Saints defender Jose Fonte. The 28-year-old Italy international — signed by Southampton in August 2013 for a record €14.1 million — squared up to his teammate and quickly followed through with an ugly head-butt that drew blood and left poor Fonte with a black eye and, no doubt, some tenderness in the nasal region.

That Southampton loaned out the inconsistent and deeply unpopular Osvaldo before the end of the January transfer window came as no great surprise. Nor perhaps was the sight of Juventus swooping for cover in the striking department to boost their Europa League campaign.

Logic aside, the concept of watching a proven madman don those famous colors in Napoli’s San Paolo only weeks after this calamitous bust-up — and let’s not forget his other case of infighting with Erik Lamela two years ago at A.S. Roma — didn’t sit well with me.

If Osvaldo boasted the same world-class wizardry of a Luis Suarez, Paul Gascoigne or even Antonio Cassano, I would probably view the situation in a different light. It’s also important to remember that Osvaldo’s misdemeanors form the latest episode in a long line of footballing civil wars, and few have resulted in such a seemingly happy ending for the miscreants in question. Here is a look at a few:

David Batty vs. Graeme Le Saux, November 1995: Blackburn Rovers were a goal down in a Champions League group match away at Spartak Moscow when Le Saux and Batty both chased a loose ball only to collide. Usually this would be a case of rueful smiles and helping one another to their feet, but instead Batty and Le Saux squared up. Perhaps surprisingly, it was Le Saux who delivered the only real blow, but he broke his hand in the process. In his autobiography Le Saux said the fight “came to symbolize the fall from grace of Blackburn Rovers.”

Lee Bowyer vs. Kieron Dyer, April 2005: Newcastle United trailed Aston Villa 3-0 at home when serial scrappers (and teammates) Bowyer and Dyer exchanged blows. Both were sent off for violent conduct to a chorus of boos and Bowyer left the field with his shirt in tatters, much like his club’s season. Newcastle manager Graeme Souness forced the “friends” to apologize to Newcastle’s fans in a post-match press conference. But the brawlers expressed no kind words towards each other.

Craig Bellamy vs. John Arne Riise, February 2007: Bellamy allegedly attacked Riise with a golf club during a training camp after the Norwegian defender refused to join in a karaoke session at the team’s Algarve resort. Oddly for a sport where spats tend to take the form of handbags rather than golf bags, the left-field method of attack seemed to spur on both players. Riise and Bellamy scored in Liverpool’s subsequent 2-1 victory against Barcelona, and Bellamy celebrated his goal with a wonderfully blasé golf swing.

Emmanuel Adebayor vs. Nicklas Bendtner, January 2008: With Arsenal trailing 4-1 in a League Cup semifinal at north London rivals Tottenham Hotspur, Adebayor aimed a head-butt at his fellow striker. The Togolese forward later admitted his fallout with Bendtner was down to the young Dane showing a lack of respect by wearing trainers in the dressing room. Tottenham went on to lift the trophy by beating Chelsea in the final, as further crises at Arsenal (Eduardo da Silva’s leg break and William Gallas’ on-field tantrum) helped to derail a season that had promised so much.