Red in the middle 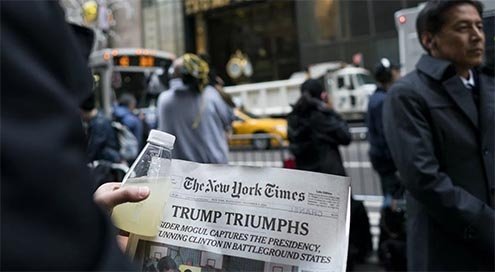 Stunning, said The New York Times, but mostly to those of its own ilk.
I

t is a persistent shortcoming of American geography that two of its most influential news organizations, the New York Times and the Washington Post, sit within 200 miles of each other in a sliver of real estate that has traditionally liberal and progressive leanings, both socially and politically. Though the Internet age has vastly expanded the number of voices and positions, it has done little to alter the preeminence of these two newspapers. That preeminence is of enormous importance since those attempting to examine the United States from abroad use the two papers and their opinions as an implicit benchmark for how the country is thinking.

Both are fine organizations, which makes the choice prudent. When it comes to presidential elections, however, the world’s East Coast addiction can be lethal.

Since Donald Trump declared his candidacy, both newspapers, implicit pillars of Democratic Party thinking, derided it as almost comic. The derision was particularly strong in New York, where Trump’s romantic antics had made him an easy figure to lampoon in the 1980s and 90s. Self-centered and prone to an awkward kind of buffoonery, his presidential run became symbolic of a Republican Party in disarray, locked in what both papers described as a civil war. As Trump’s rhetoric turned nasty, vindictive, and even hateful, this buffoonery was transformed into a marker for evil, one that must at all costs be repudiated.

The view was transmitted worldwide, making Trump into a pariah whose sole fan was Vladimir Putin.

Missing from the East Coast fanfare was how Trump’s message was playing in the Midwest, which would eventually decide the elections. The once-great newspapers of that region, including the Chicago Tribune, St. Louis Post-Dispatch, Kansas City Star, Cleveland Plain Dealer, and further south, Louisville Courier-Journal, are a shadow of their former print selves, shoved out of the limelight by cyberspace. Their views, and those of other regional newspapers, while hardly wildly supportive of Trump, made the dissatisfaction of the local citizenry loud and clear. Many who who deplored Barack Obama in 2008 still deplored him now, particularly after two cautious terms in office. Traditionally Republican, they’d wanted something, or someone, new, and anyone but Obama’s anointed successor, Hillary Clinton. Few of these unsettled folk were wild radicals. Most were instead members of what Richard Nixon once labeled “the silent majority,” in his 1968 campaign. At the time, it too drove the East Coast to distraction, since Nixon also carried with him an evil label sown in the Red Baiting era of the 1950s.

The mood of these so-called “battleground states” was measured mostly through polls, most of which suggested Clinton had a slight advantage. Rarely was that slight advantage examined through the lens of local periodicals and pundits. Little heed was paid to those who found aspects of Trump’s law and order, protectionist, and tax cutting messages appealing. His non-political, business background was also a plus, giving him the credentials of an underdog leading an insurgency against a stacked system managed by and for Washington and New York interests, the Clintons in the forefront. People like conspiracy theories, and Trump spewed them zealously when he saw how well they worked. He simplified things, often resorting to devil-may-car bigotry that offensively, and to some attractively, exploded Obama’s and Clinton’s studied caution. And the more the East Coast mocked him, the greater his support base grew.

Yet the message of choice — the one most broadcast globally — was that of the Times and the Post, who increasingly portrayed Trump as a sexual predator and vile thinker who could not possibly win, which implicitly became should not and cannot win. From London to Rome, the East Coast intelligentsia message was the one most broadcast, as it has been for decades.

This explains, at least in part, why both the Post and the Times felt compelled to call Trump’s victory an upset, shocking, all but unimaginable. The sky had fallen, and unexpectedly.

Except that a more careful and open-minded reading of the broader American mood would have given Trump more than half a chance. Liberals and progressives so desperate to deny him bought into the sound of their own music, assuming their version of “the worst” could not come to pass. But the East Coast, and the West, are fins of fat fish, one whose organs function in a belly whose churning is most evident on election day, and, for those who choose to ignore it until too late, sounds very much like a belch.