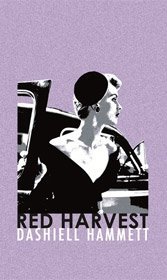 If Gatsby and his Fitzgeraldian ilk helped Dandify the 1920s East Coast, albeit spiking the party with irony and buzz-kill angst, Hammett’s San Francisco Continental Op left any and all illusions at the West Coast’s rundown door, uninterested in gilded gates or the people behind them. Hammett’s population started rotten and stayed that way, starting with his dumpy, 40-year-old, anti-glam detective (“Some of my 190 pounds were fat, but not all of them…”), who is delivered into life as a no-nonsense problem-solver in a geography rife with amoral broads, devious bootleggers, blackmailing tycoons, and corrupt cops, all of them dispensable.

Hammett’s first novel may be both his cruelest and also his most deliberately outland, with the hard-boiled Op (who ended up defining a genre) hired out to Personville, known to most as Poisonville, a small Montana city once lorded over by mining magnate Elihu Willsson, “owner” of cops, mayors, and newspapers. But the once-wily Willsson has lost control of his fiefdom to rival bootleggers Whisper Thaler, Pete the Finn, and Reno Starkey, and a lackey police chief called Noonan. His son a casualty, Willsson hires the op to “clean town,” to the tune of $10,000, but the contract soon ends up being a piece of an elaborately shifting double-cross. When the runty but dogged Op decides to “set the boys against each other,” the result is a death toll that eventually climbs into war zone range.

Hammett’s landscape is all-corrupted, his hero part of the taint he “cures,” while aware from the start that the only way through mayhem is more mayhem, which means machine guns (“busy little death factories”) and pipe bombs. Harm’s way is a constant. So are gold-digging women, in this case one Dinah Brand, who takes her pick of Poisonville’s men and milks the resulting wreckage, or tries. It’s Brand who pegs the Continental Op for what he is, hardly Hollywood material: “A fat, middle-aged, hard-boiled, pig-headed guy,” but one who also has a knack for navigating the ruined, boozy, lustful backside of the American Dream (one whose language Hammett mastered). “I don’t like being manhandled,” the Op says of Brand, “even by young women who look like something out of mythology when they’re steamed up.”