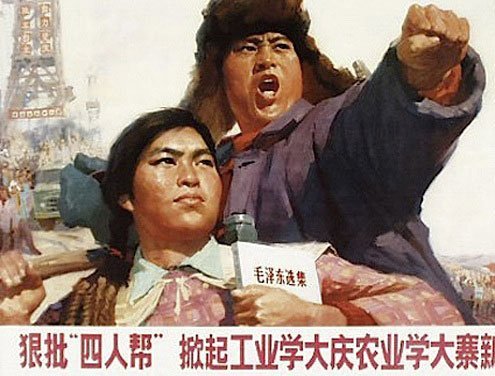 What if Carmine Mow entered the neighborhood? What if — and Stewart was growing increasingly agitated — they kidnapped Sally, his dog?
A

t Easter, we decided to dig to Red China. We lived in Washington. It was Merle’s idea. He’d been all over the world, he said. But not to Red China. The way to get to Red China, he insisted, was to dig. You started with a small hole, in the back yard, say, or near the telephone pole, and if you really kept at it you eventually got there — “first you hit a bolja, then lava, then Mandarings …”

Merle enjoyed speaking that way. Adult-like. We had no idea what a bolja was, but Stewart — who had just reached the epic age of nine — suggested it was very important, probably a city. “Merle says if you get to Bolja, that’s really deep …”

We began with shovels and small spades. Apologetically, Merle brought me only a “soap” spoon, which made digging time-consuming. What, I asked Merle one sunny day, is a Mandaring?

But when Stewart explained that he, too, was mystified by Mandaring, Merle announced that it was the language of Red China, which they taught along the length of the Surloin Wall. The Surloin Wall, he clarified, ran along the outer fringes of Red China to protect the people from the “Soveneets,” who had weapons, including boljas. Even though the Soveneets and the Red Chinese were both “communistic” — which meant they whimsically vaporized people — you couldn’t dig to the Soveneet nation because it was on the wrong side of the world and the lava was too hot and there were special indestructible guards. To dig to Russia, you needed the Army and the Air Force, and they weren’t about to help us, at least not at Easter.

So we were stuck with Red China and focused on its leader, the feared Carmine Mow. Merle brought us a postcard with Mow on the cover. Mow had a toothy smile, which Merle told us was just a part of what happened when you were emperor.

I wonder what it’s like being half-a-teen these days. Boredom is fibrillated until it grows technology. There’s chat, a liquid sub-language. Morse texts fiddle phone-to-phone. Virtual assassins cut their teeth on hyperactive video games. The geography of indolence depends on layers of language-free narcissism, plugged in or charged.

I had only a soap spoon, which soon bent.

Within a week the Red China hole was a six inches deep. We’d meet at noon, discuss strategy, throw rocks at the bee’s nest, and then return to the solemn enterprise.

“What,” asked Stewart, “will we do in Red China? I mean, not speaking Mandaring?”

Merle was apparently ready for this. “Why would you want to talk to a Red Chinese?”

Silence. Stewart paused, tremulous. Why were we digging to Red China if everyone was red? Wouldn’t they hurt us? “It’s not as if we have protection,” he insisted. And what if they used the hole to come back? What if Carmine Mow entered the neighborhood? What if — and Stewart was now growing increasingly agitated — they kidnapped Sally, his dog?

Stewart regrettably understood this as “dogs” and began sobbing. He announced that he was quitting the enterprise before we even got to a bolja, even if it meant he had to spend the rest of the summer locked in his bedroom with Sally and his Beatles posters.

Why the bay, I asked?

“We can take a raft to Syveria.”

“That’s the place where they keep submarines.”

We never found out who “they” were, but we were soon on Easter break at the bay, assembling twigs for our tree house, freed — momentarily — from the Mandaring-speaking, bolja-wielding Red Chinese.

When we returned to the city, we found our dig surrounded by workmen.

“That hole,” said Mr. Miller, the bus driver who was also a construction foreman, “is mighty too close to the transformer.”

“The Red Chinese tried get through,” he exclaimed, “but the Army stopped them!”

In case the Red Chinese did appear, Merle made us promise to uphold America. We agreed. So did Mr. Miller. So did the workmen. “Some day, when the world is free,” said Mr. Miller, tapping Merle on the head, “we’ll have you boys to thank.”

Whenever Easter rolls around I don’t think of God or eggs, but of some day getting to the bolja and picking up a Mandaring dictionary. To commemorate the fall of the Surloin Wall, naturally.