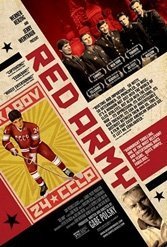 Gabe Polsky’s superlative and many-sided documentary about the great Red Army hockey teams of the 1970s and 1980s relies above all on the stabilizing and often moving character of his prime subject, the great defenseman Viacheslav Alexandrovich “Slava” Fetisov. A story about the Soviet Union’s ruthlessly nationalistic effort to build the best hockey team in the world — it succeeded — becomes mostly one man’s account of his life on that team, his love of country, and his increasing disillusionment with taskmaster coach Viktor Tikhonov, who took over after the Soviet Union’s stunning 1980 Olympic loss in Lake Placid and modeled a new team in keeping with his dictatorial style. It is also about the style of play perfected by founding coach Anatoli Tarasov, who saw hockey as a male adjunct to ballet.

Thanks to smirking Fetisov’s ironic facial and body language (and reams of exceptional old footage), the perplexities of Soviet life and the country’s collapse come alive. His irreverent candor is the film’s spice (“Cold War? Bullshit! It was money…””) Fetisov loved his country but felt hemmed in by Tikhonov and the human and professional limitations imposed by a professionally cruel regime — it was Stalin who first promoted Soviet hockey, making it an adjunct of the military (as with all Communist-era sport) and demanding international success that Fetisov and his mates delivered on two decades after the little tyrant’s death.

While finally accomplishing the American Dream by moving to the U.S. and winning the Stanley Cup with the Detroit Red Wings in 1998, Fetisov wasn’t able to turn down President Vladimir Putin’s offer to come home and coach the national team. Why? Because he and his teammates, formed in the much demonized Soviet tomes, refused to turn their backs on country and tradition, a melancholy but vital note that emerges from a superb sports film that transcendently merges sports, politics, nationalism and contemporary history.