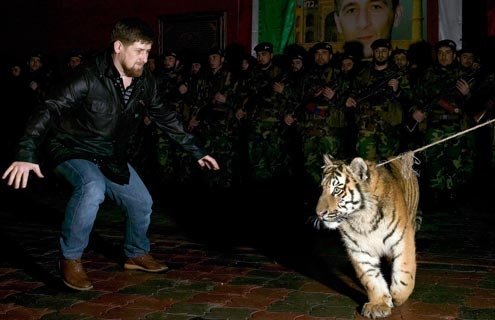 word of warning, better late than never: ignore Chechnya at your own risk. Not the Chechnya of the bloody 1990s wars against Russia, but the “repaired” Chechnya under Muslim rule, sanctioned by Moscow, its guts still shredded by strife that pits government Muslims against radical ones and secular Russians against a host of terrorist organizations, the latter eager to see the territory become a Taliban-style Muslim state.

Over the last decade, the North Caucuses have hosted some of the most ferocious but mostly unreported fighting on the planet. Chechen leader Razman Kadyrov, not yet 40, a former guerrilla leader whose most ardent ally is Russian President Vladimir Putin, has for some time been determined to put his personal stamp on the region, exterminating religious opposition while creating a personality cult. That cult recently included an opulent Shah of Iran birthday party that included Hollywood guests.

In many respects, the situation differs little from the ascent of Middle Eastern leaders in the vein of Saddam Hussein, except that Saddam was a devoted secularist who changed his tune only late in the game, in a vain effort to use Islam to rally a lost cause.

Chechya, Dagestan, Ingushetia, and both North and South Ossetia — contested during Russia’s August 2008 war with Georgia — are hinterland battlegrounds in which militant Islam is up against moderates it sees as sell-outs, and against loathed Russia, perceived as a millennial overlord.

U.S. tolerance for Putin, and Putin’s own marriage of convenience ties with Kadyrov, conspire to form an incendiary mix, particularly among zealots and their young protégés. The Beslan school siege of 2004, in which a North Ossetia school was taken over by Islamic Chechen rebels, was an example of the confrontation. In the end, 385 people, mostly children, were killed, and hundreds more injured.

Chechnya’s Kadyrov, who was installed to fix all that, remains as divisive a figure as there might be in the world. A former Muslim rebel, he defected to Russia and won cordial support from Putin, who when he entered office in 2000 was desperate to end the costly Chechen wars at any and all cost.

Kadyrov’s turncoat militia effort — he was a Muslim warlord fighting on the Russian side — helped assure that he’d “win” the presidency when the war’s frontal side wound down, which it did by 2005, at an overall cost of more than 200,000 dead.

In 2007, Putin literally pushed the 30-year-old Kadyrov into office. He soon moved into opulent digs in the country’s once-devastated capital, Grozny, and began rebuilding it with a Muslim accent — notwithstanding a Western-style playboy life. Putin, eager to make the problem go away for good, hasn’t interfered, at least not directly.

Kadyrov’s promise to exterminate local Islamic extremists has instead been buttressed by Russian money and special forces, in much the same way the U.S. supported Osama Bin Laden and his Mujahideen fighters against the Soviet Union in Afghanistan of the 1980s, paying little heed to the consequences that such alliances might eventually produce, particularly if those once helped later felt betrayed.

Like Reagan Administration officials Dick Cheney and Donald Rumsfeld, who in the 1980s backed Saddam against Shiite Iraq, Putin has openly favored pledging allegiance to anyone who promises to keep extremist cells at bay. The corruption of those he supports is of little interest to him, since his own grip on power has always been dominated by no-nonsense, Soviet-era techniques.

Kadyrov has been repeatedly accused of human rights abuses but Putin’s protection, and the region’s remoteness, has kept debate to a minimum. For the West, particularly since 9/11, the axiom “the enemy of my enemy is my friend” has driven most policymaking. Since neither Russia’s Putin nor Kadyrov’s “personal” Islam have any patience for the Koran or Sharia law, they’ve been situated on the right side of a wider wrongness.

The point to all this isn’t what it has to do with the United States, but whether, yet again, by displaying widespread ignorance toward events in arcane but strategic global stirrings, Americans again risk misunderstanding what’s happening in worlds tens of thousands of miles away from its running lanes, and seeing only good guys and bad as a result.

When it comes to Chechnya, and for that matter much of Central Asia, much of the theater audience, aside from the civilian population, wears dark-hued hats. Add to that a young and mobile population eager to leave town — many do — but now able to continue to embrace local trends via social networking, and you get infinite possibilities for local fights to go global.