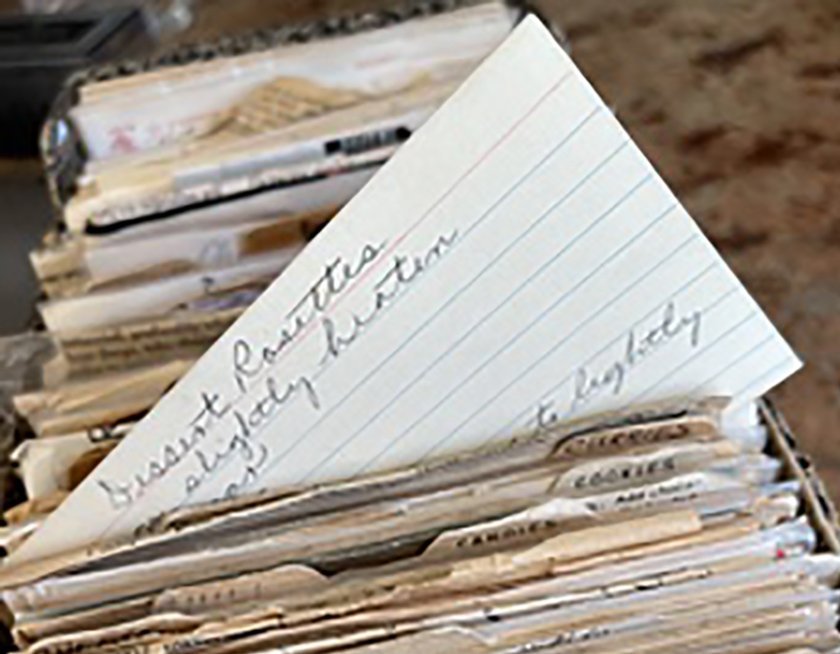 n my desk is a treasure, my mama’s Recipe Box, earning capital letters because it is priceless. No doubt there are other such treasures in the world, sitting on shelves, tucked into closets, or perhaps used daily as a reminder that recipe cards, articles, and notes are little pieces of one’s culinary friends and family.

The sweet players of the pots and pans in the orchestra of eating.

I was looking for my mama’s famous hot pepper jelly recipe, which I make often during holidays for gifts, and suddenly, it was gone from the box! My fault, I’m sure, for taking it out over the years, misplacing it, and then putting it where I would always find it. A good recipe for losing almost anything!

But there was more. I pulled out a card at random that simply said, “Dessert Rosettes.”  The ingredients are written out in my mama’s beautiful hand, and it seems most of the usual suspects are there — eggs, sugar, milk, flour, vanilla — but just after the “Add sugar to lightly beaten eggs,” nothing. Only “Etc.,” capital “E.” Where on earth was this going?

Such is the mystery of some recipes, that little “etc.” Like life…

There are so many other areas in her collection to plunder: Dips, for example, an ubiquitous 1950s favorite, her favorite, for Artichoke Dip. 1 can of artichoke hearts, drained, 1 cup of Hellman’s or (my) homemade mayonnaise, 1 cup grated parmesan, mix and bake 30 minutes at 350. Add Tabasco to taste before serving (always in a silver chafing dish at Christmas and always devoured before all other offerings).

Canned artichokes? My mama used canned? No way. But starting with her subscription to Gourmet Magazine in the 40s she cooked like a madwoman from the first issue. Fresh artichokes were not to be found in Texas, or I am sure she would have peeled and simmered and puréed the real magilla.

Still, I might try this one, purist that I am, if only to remember my complicated mama and this time of year, Christmas, when she died.

A time of strife, of so many differences, of only finding peace when we were in the kitchen, making good things together.

It was devastating, as we had just become real friends after my father’s death, and I thought we would share all that we had missed during my rebellious youth.

A time of strife, of so many differences, of only finding peace when we were in the kitchen, making good things together, but each of us simmering on opposite burners.

And yet, I, too, am a madwoman in the kitchen.

Regardless of the past.

I cook for pure pleasure, for the way it makes me think about life, and for the feeling of enrichment as I stir and form and season and create.

I can place the beginning of my cooking mania at five years old, with little cinnamon pinwheels I made from scraps of mama’s flaky dough, formed with a red-handled toy rolling pin and baked alongside her unbeatable pies to a golden finish.

Did her ambivalent feelings toward me begin then, or did it take a few more years to hone her wishes that I conform, be part of a society she had accepted (but in which she was clearly an anomaly), to cut my long hippy hair, to join the Junior League, to lengthen my radical skirts, to be perhaps a secure accomplice for her own misgivings about not letting her real self simply be?

By 16 I had left that limited world, at least in my head, and I began to cook, cutting my culinary teeth on Gourmet Magazine’s Volume I and II and that then-bible of the kitchen, The Joy of Cooking.

A perfect title for the immense pleasure I took in creating dishes, thanks to my mama’s guidance, vast knowledge, and surprisingly objective teachings in the kitchen, compared to the daily strict reminders of rules that I should follow to shape my life.

Before I left Texas for, oh, lordy, California, and we cooked together, my mama’s rich wisdom about so many things was offered to me without malice, without demands, and, almost unconsciously, she became the mama I wanted her so much to be, uncritical, open-hearted to my me.

So I guess we both were guilty of wanting changes in the other.

But I filed away her vast wisdom to enrich my own life once liberated from Texas trappings.

Mother-daughter troubles often surface in the teens. Views on how to live one’s life so often differ (and all the opinions don’t help matters). But I realized after much reflection that my mama’s demands could only have come from her own insecurity, even perhaps from a bit of envy as I went down my own freewheeling paths. I am sure they appeared strange to her, dangerous even, but I think she really wanted to let her own defenses down, let her talents loose, be accepted, no matter the road she might chose.

I see now that she wanted to not care what others thought. To create her own recipe for life. If only she had.

Her kind heart, her wonderful brain, and her amazing wisdom have come more into focus than her faults.

Going through this precious collection and having made headway into understanding how a parent can grip a child and fear the day that grip loosens, I feel again, despite troubling memories, my mama’s day to day generosity and good heart.

I found the card for her famous Cornbread Dressing, always made in huge quantities to be given as gifts to friends who would not dream of stuffing a turkey without it! Her cookies, which filled our kitchen jars, were for all, especially my friends from high school who came by the house on an often daily basis, making a beeline for the cookies after greeting my mama, then casually asking, after plates of her Danish butter cookies (gingersnaps, chocolate chip, and more) and several glasses of milk, “Oh, yeah, by the way, is Suzy home?”

In this box are little asides, “the best ever are little 14-year-old Cecile’s sand tocks” or “oven too hot in recipe, what are they thinking, take down to 300” or “my sister’s favorite deviled eggs: peel eggs and soak in jalapeno brine for 4 days, chop yolks with mayonnaise and jalapenos to stuff whites.” There is her recipe for Martini Garlic French Dressing, made with gin and vermouth! Who knew?

Then, I discover, there are the bread and pasta recipes I sent her, folded neatly, some almost hidden among the cards. Did she use them? Or were they reminders of a daughter who would never fit into her plan. Still, there they are…

I will finally go through these jewels, remembering, along with all the good tastes from her kitchen, her futile attempts to manage my life, my self, my choices, my desire to just be me. It should have been enough. Perhaps it was, but she never said.

So many years have passed. My mama’s grasp has loosened; her kind heart, her wonderful brain, and her amazing wisdom have come more into focus than her faults.

The truth is that I have found it hard for years to talk about her without choking up.

I miss her. Warts and all. And what my mama taught me, among so many things, in that safe and fragrant place of cinnamon pinwheels, would never have been learned from books.