Reasons for and Advantages of Breathing 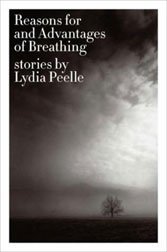 Peelle’s rural enchantments are a moveable feast for the anthropomorphic. Evident are deer, ponies, and malformed goats; lurking are panthers, thunderbirds, blind salamander. Peelle’s Dustbowl narrators, entwined with animals, transmit a vast and holistic melancholy. Mostly set in outback Tennessee or nearby, both the writing and the themes have the mournful elegance of a grandfather clock.

The best stories are near-mystical. Taxidermist Jack Wells, the amputee diabetic of “Phantom Pain,” doubts local suspicion that a panther’s on the loose. Even his ex-wife, who calls him “Hud,” believes. But he’s a pained cynic (“The water [is] poisoned, the air ruined, too many damn people and more every day…”) He stopped hunting before his diabetes because “you can’t get lost anymore.” But then a girl gets a tattoo, a dog vanishes, and Jack drives to an old creek. Whereupon something strange happens.

In “The Still Point,” Cole, a 30-year-old carnival drifter in the clutches of post-Kerouac world-weariness, takes the matter of a stolen necklace too seriously and begins pondering the fate of his dead twin-brother, killed in an accident (“escape velocity,” Cole calls it.) A beauty pageant brings out girls, impulses, but taciturn Cole bottles it up, mystified (“the loneliness of the ages suddenly grazed past…”) He begins to lose his bearings: “It all moves too fast.” But then rain comes, a tornado calling, and his heart starts pounding.

The title story sees a separated woman falls in love with an aging herpetologist whose sense of reptiles supplies a leakage of intimacy she craves, “a slight parting of the curtain that hangs over the unknown…” The woman, like Jack Wells, Cole, and so many of Peelle’s characters, believes her “hopelessness extends to include the entire human race.”

For Peelle’s people, life is untamed, rudimentary, Calvinist (“No matter how hard you work, it’s a gamble and the house always wins,” says Lucy in “Kidding Season.”) As humbling as it sounds, these folk still listen to and covet their feelings. The stroke-stricken narrator of the final story speaks like a dark Whitman: land and animals are man, and man is just human stuffing. “The shrapnel of the big bang runs through my veins, the dinosaurs, the mammals, the cells of the bones and shit of every man, woman, or cockroach that walked this earth before me.”

Whatever Peelle’s has put herself in touch with is fundamentally thrilling.