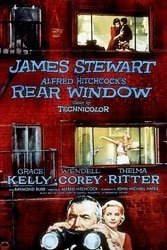 The most static and yet eccentrically pleasing of Hitchcock’s 1950s productions is also in many respects the most ambiguous. News photographer L.B. Jeffries (Jimmy Stewart) is stuck in his Greenwich Village courtyard apartment waiting for his broken leg to heal. He’s tended to by wisecracking nurse Stella (Thelma Ritter) and doted on by fashion slave fiancée Lisa (a serpentine Grace Kelly). He wishes both would leave him alone to pursue his injury-time hobby: playing telephoto voyeur as his neighbors both bored and agitated go about their day-to-day business. He gets more than he bargained for when the man across the courtyard, salesman Lars Thorwald (Raymond Burr), makes a series of mysterious nighttime trips, suitcase in hand, while his previously in-view wife suddenly vanishes. L.B. is sure he’s onto a murder and dismemberment and gradually draws Stella, Lisa and cop friend Tom Doyle (Wendell Corey) into his obsession.

Hitchcock keeps his eye trained on L.B., a nice-guy urban voyeur with a slightly lascivious smile whose only eyes are those of his “portable keyhole,” as Stella calls it. Emotional speculation leads to sure assumptions that lead to presumptions of guilt, “truth” gleaned from relentless gazing into the slice-of-life kaleidoscope. Is L.B. on to a crime or has he gone stir-crazy and taken others with him?

Essential in all this is courtyard itself. Which while very much modeled on Neapolitan cortile and its hubbub, the people do without neighborly interchanges. Everyone’s vaguely aware of everyone else but no one talks, laying bare the kind of urban estrangement American sociologists would soon see to underscore the downside of city life.

The hyper-feminine Lisa helps play danger-seeking detective to get her man while the real detective ends up getting it all wrong. “We’ve become a race of peeping toms,” objects Stella, until she, too, turns into one, with the camera proving — as the web does now — that there’s no such thing as a “secret, private world.” Someone’s always looking, or trying to.