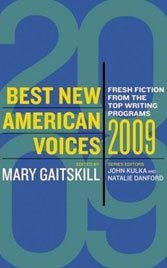 octor, lawyer, Indian Chief? None of these. Once-familiar American protagonists have gone missing from this annual “Best New American Voices” short story collection. In our flat globalized world, new generation American writers build their stories around: the Khmer Rouge and a monkey king, a rock-climbing team on Mali’s Five Fingers of Fatma (sic), a U.S. soldier returned from Iraq’s death traps, a black woman obsessed to madness by her caretaker job for writer Dorothy Parker. We even tour Yellowstone National Park-though without the geysers.

Notwithstanding such exotic variety and multi-cultural sweep, this “fresh fiction from the top writing programs” exudes an odd sameness. These authors have left behind Updike’s casual afternoon adulteries, and Norman Mailer’s raging attack on the American dream. They’ve got death on their minds. Mortality hangs over this collection like a rock ledge in quake zone.

Quick Q/A. Right now. Because you’re wondering: What? I haven’t even gotten to my Christmas list, and there’s a “best” volume already packaged for 2009? Not exactly. It was published in 2008. Designed as crystal ball of up’n’coming fiction names. All culled from the aggregate of America’s writer programs, conferences, workshops.

And since the U.S. fiction factory system boasts many thousand craft shops, the 14 “best” stories here are as technically poised and polished as they come. All are good reads. A few even beat out deep and long-lasting echoes. Together, they constitute a broad view of what makes our younger writers itch.

However… if you’re looking for the hot topics headlining our daily papers and online news sites, you’ll find little of that. Which is okay, though that heavily weights to an “outsider” position. Plus: the protagonists are all isolates. And almost all the works deal with the aftermath of death.

As in the first and last tales. Two stories assigned the key positions offered in any short story edition — because they bell the collection and deliver the heftiest punch. In them you’ll find that death’s a bummer — for the survivor.

As opener, Baird Harper’s “Yellowstone” is straight in the realistic tradition — tracking rundown overnights without plumbing, and pivotal encounters with the odd, uprooted figures that seem to populate our U.S. landscape. Those random, off-center characters that can attach to the most ordinary among us, recalling leeches in medieval medicine.

All Harper’s aging and grieving protagonist Hurst wants is to bury his life companion Emily, where she hoped to lie: in a cemetery within Yellowstone Park. At his motel stop outside the Park, a large angry woman knocks at his door, demanding money to pay her own room. Next her young daughter Monica arrives, to sell cookies she calls “Girl Scout.” She is dressed in two large sheets of Scout-color paper, held at the sides by safety pins.

Both mother and daughter’s continued intrusions into his room carry threat and menace. Yet Hurst suddenly abducts the girl into his car. He has someone to accompany him to the park and cemetery. Where he finds Emily and her coffin abandoned at the edge of an open grave. All too familiar with dead-end plans, Monica explains to Hurst: It’ll be the same as burial, “if we walk backward really slowly.” One way to handle death’s fallout.

In Lydia Peelle’s tightly dramatized closing work, “The Still Point,” carnival worker Cole has been shadowed for fifteen years by his twin brother’s accidental, and fatal car crash. He can’t figure life anymore. By the time the carnie troupe swings to Illinois, “I get to thinking the world is going to end.” Days grind to the wheezing whirr of the rides-the Howler, the Zipper, “the looping soundtrack of the carousel.”

The weather turns to tornado season: Maybe “we’ll just spin off our axis and out into the center of space. Hell, Thunderbird, Illinois might be the first to go.” If it is, Cole and the dark-garbed youngsters who suddenly invade the carnival’s empty, tornado-whipped midway will gladly go with it. Death has long been in the air, and recruited its followers.

Funny how this “arts programs” compilation of new gen voices veers so far off life’s center. Toward a haunted awareness of its ephemeral fragility. A kind of tired “discovery.” Made momentarily fresh through these talented writers’ honed prose, and their passion. Many of this volume’s 14 contributors are already sliding into mainstream: Vietnamese/American Nam Le, for one, with his recent, fine story volume “The Boat.”

This volume is your sneak preview of some strong headliners on the fiction horizon.