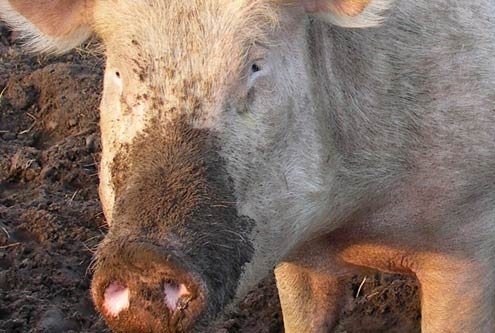 You can lead a pig to its death, but will it take the train?
W

hen you take on a small holding, the question of how to slaughter animals sooner of later rears its ugly head. It’s honestly not something even the most dedicated carnivore looks forward to, but it must be done. Otherwise you end up like us, with the only pig in Le Marche to die of old age. When she did die, she was inedible. When alive, she was a complete drain on precious resources — aside from her dedicated Hoovering up of household waste. Her only contribution to our lives was her amiable nature and grunty conversation.

Her first legacy was the problem posed by her 300-kilo carcass. Think about it: 300 kilos, or about 660-pounds. That’s no easy weight to lift, bury or burn. In the end we resorted to a big hole and a mechanized digger, but it felt ignoble and very likely was entirely illegal. We resolved that if we got additional livestock we’d be far more professional about the whole thing.

The second attempt was much better. As winter approached, we engaged the services of a local guy who agreed to slaughter our pig at home and help us butcher it. The result was a painlessly executed pig and an awful lot of delicious porky products.

But the next year our reliable guy had a bad back, which meant he was completely out of action because, believe me, you need a strong back for pig slaughter. We had to call on the local abattoir.

Now, this is not something I expect many of you to have done. But if by chance you’ve ever visited an abattoir in a small town you probably know that it’s not as bad as the Middle Ages-of-the-mind portrait city-dwellers might conjure up.

Rational people often insist that an animal knows when it is about to be killed. But I’ve never seen any evidence of that. We watched a procession of cows entering a slaughterhouse and I can confidently say that they didn’t show the least amount of stress and couldn’t possibly have any knowledge about what was about to befall them, which was a quick and efficient death.

After all, animals understand only experience, and being slaughtered isn’t something that happens twice. So we left the abattoir confident our pigs would die painlessly. What we hadn’t bargained on was how difficult it would be to get her there.

We booked a truck to come and pick up two pigs. That was simple enough. We got one into the truck by using the old “pigs will follow a bucket of food to the ends of the earth” trick. We then tried to get our sow in behind him.

Tried is the word.

An hour later we were all exhausted, sweating, bruised and miserable. That doesn’t count the sow. After a while I could no longer look her in the eye. I’ll spare you the gory details but I will tell you that that was the first and last time I try to force an animal to its “gallows.” From now on I’ll take advantage of the law that allows pig slaughtering at home during the coldest winter months. The abattoir maybe stress free, but getting a stubborn pig into a truck most certainly is not.