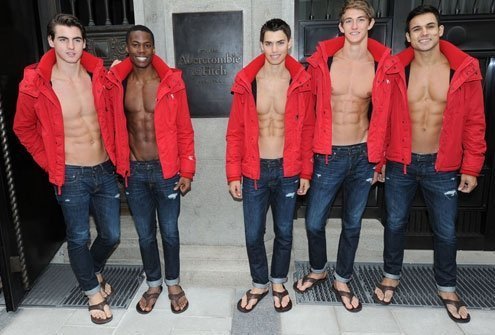 Turtles at Abercrombie & Fitch in Milan: Good work if you can get it.
W

hen I arrived in Italy more than 10 years ago, it seemed to me every guy had that lean Mediterranean build. Like the guy in the Dolce & Gabbana perfume commercial wrapped in sexy white and barely-there swim trunks. But a lot can change in decade. Aside from die-hard gym bunnies with perfectly sculpted muscles, Milan men these days seem to be going for a more relaxed look. Some, like the young bankers I teach, are out of shape and soft as marshmallows.

The change seems to have coincided with the expansion of the U.S.-inspired “happy hour.” But unlike the U.S., where after-work get-togethers tend to mean a half-price beer and a bowl of peanuts, a Milan cocktail starts later (often 7 to 10 p.m.), costs more (€9), and usually includes an all-you-can-eat buffet with everything from antipasti to full out pasta dishes.

After a summer of too many happy hours and too much beer, Alberto and I decided to diet. Weight can sometimes obsess gay men. Our ideal body images are painful relics of the unforgiving 1970s, when emaciated gays dominated the discos. Whereas Alberto has a natural Italian slim form, I have a “more robust” Scottish build. Though we’re the same height, I usually weigh about 10 pounds more. When Alberto gets a little on the chubby side his marsupial pouch sticks out. I, meanwhile, start looking and feeling like a large sausage with a bulge in the middle.

That’s where Milan life plays a role. The city is the fashion capital of Italy, if not Europe. For most people, though, living here means being little more than a passive observer of the fashion scene.

But our diet efforts just happened to coincide with the city’s annual Fashion Week. What better reminder of a middle-aged bulge than streets filled with impossibly tall, emaciated young women — children really — with suspiciously inflated lips and breasts?

Happily, it wasn’t men’s fashion week, which comes later in the year. That’s when the six-packs — called turtles in Italy — start their strut. These male specimens couldn’t possibly occur in nature. They’re part of an unattainable physical fantasy peddled by fashion houses for millions of dollars worth of advertising.

Fashion matters, of course. Otherwise it wouldn’t attract the attention it does or generate as much cash. Unfortunately, gay culture often embraces the fashion world’s unrealistic representation of the human body in ways that are can be cruel and destructive. Take Abercrombie & Fitch. A few years ago, the 120-year-old American casual wear firm attracted lots of attention among both gay and straight consumers by staffing its Milan store with shirtless muscle boys, basically a bunch of perfect turtles. Understandably, it has become a kind of gay fashion label.

In 2006, chain CEO Mike Jeffries — who’s still in charge — explained the store didn’t carry larger sizes because it didn’t want fat people wearing its clothes. “In every school,” he said, “there are the cool and popular kids, and then there are the not-so-cool kids. Candidly, we go after the cool kids. We go after the attractive all-American kid with a great attitude and a lot of friends. A lot of people don’t belong [in our clothes], and they can’t belong. Are we exclusionary? Absolutely.”

Mr. Jeffries — and perhaps much of the fashion industry — profits from insecurities. Many young people, particularly gay kids, grow up with rejection, ridicule and a constant sense of being ostracized. Some may have even been taught to hate their own bodies. I grew up as an inactive, chubby kid. My body alienated and frightened me. It wasn’t until I joined the university swim team that I grew more comfortable in my own skin.

I’ll never be self-confident enough to qualify as cool, but I certainly don’t need to wear a label intent on making others feel bad just to feel good. That’s definitely not cool. By definition, the truly cool don’t need to put down anyone.

Did I mention a diet? To hell with it. Tonight I think I’ll go to the “Company” club, a popular bear bar, and get a beer with some truly cool big boys.