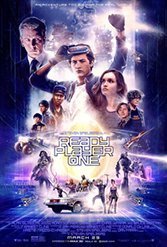 About the time George Lucas and Steven Spielberg embarked on their magical mystery romp to revive the spirit of Saturday Matinee filmmaking, punk was big. So were Atari video games, Stanley Kubrick movies, Rubik’s Cube and Deco artifacts. Just beneath this pop patina, the young likes of Bill Gates and Steve Jobs (and many others) were busy dreaming up a future shaped by a parallel digital reality that, on command, would leave the real one behind.

All these details and more are at play in Spielberg’s “Ready Player One,” a fantasy thriller about virtual reality gamers that, while set in 2045, serves as a platform for a walk down pop culture memory lane.

Wade Watts (Tye Sheridan) is an 18-year-old gamer in a burned out, post-everything Columbus, Ohio, the new center of what looks to be a ghetto universe. “Reality is a bummer everyone wants to escape,” says Tye, who lost his parents at an early age. So, he dives into “The Oasis,” a virtual world created by a beloved visionary named James Halliday, Spielberg’s riff on Jobs.

When Halliday dies prematurely, he leaves behind a challenge: whoever can find three keys, clues to his thinking and his past, will win control over his virtual universe, a mega-trillion- dollar real world enterprise that rival gaming common IOI is eager to acquire and incorporate. IOI’s boss is a corporate tyrant named Nolan Sorrento (Ben Mendelsohn). As soon as Spielberg sets his premise, it’s off to the Industrial, Light and Magic races, 21st century style, with avatars resplendent. The underlying themes are pure Sat-Mat Spielberg: the value of family, boy-meets-girl (Olivia Cooke as crusading Samantha Cook, aka Artemism), kid-power camaraderie (real and cyber), and evil greed, in the form of amoral corporate interests. Two-thirds of the flick is stuck in gaming clash mode, clearly targeted to please an audience from Jurassic Spielberg knows little about but is eager to please. All in all, he does a yeoman’s job in maintaining the spirit of his matinee idealism. Boys, either handsome avatars or real world nerds, get the girl (and for whatever reason girls stay pretty in all worlds).

In an adventure movie world that thrives on superheroes and effects, the visual extravaganza is par for the escapist course. Dialogue is incidental. Here, Watts’ blonde avatar Parzival must tell his CEO adversary, “I will never let the future of The Oasis rest in your hands, Nolan Sorrento.” In the 1980’s “Raiders of the Lost Ark,” Harrison Ford’s Indiana Jones took one look at his French rival and snarled out only his surname, “Belloq,” a wry smirk doing the rest. But times change.

What’s nice is Spielberg’s willingness to toss in pop references that revive the likes of “Saturday Night Fever” and “The Shining,” mixing in boom boxes and early video game consoles. It’s all far too long, happy ending included, but in great good innocent fun. Watch for Mark Rylance (“Bridge of Spies”), who gets a cameo as Anorak, Halliday’s avatar.