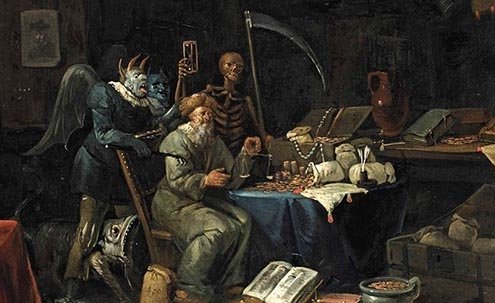 In Italy, physicians once competed with the hordes of operators telling fortunes on live TV.
E

very Wednesday for 20 years my apartment was cleaned by a man named Giuseppe Sonnino, commonly known as Peppino the Jew. He was a world-class professional who spoke Roman dialect so dense that my native friend Mariateresa regularly missed words. Rome’s Nazi occupiers had failed to find his hiding place in a Gentile neighbor’s apartment when they swept through the city in 1943. His brother was picked up, and survived Auschwitz, but never talked sense again.

While working, Peppino would shuffle around in felt slippers, so his every step would buff the floor. For our parties, whose guests were the grubbiest of 1960s types, he insisted on answering the door and passing around drinks in a white jacket with gold-colored buttons. His pride was so fierce that when once he saw that a client had left two treasury bills in plain view on a table with a strand of hair in between, thinking to test the help’s honesty, he quit on the spot. Toward the end of his life, he cleaned better with galloping Alzheimer’s disease than anybody else could with intact mentation.

Peppino had great faith in my powers. I remember how one day in the 1980s he set a friend’s laboratory report in front of me and asked me for an interpretation. At first, seeing what he’d handed me, I shook my head at this absurd request. But he was so crestfallen I agreed to take a look.

Before me was a flimsy pink National Health Service form with blurred numbers scrawled next to enigmatic abbreviations. I deciphered the first ones as hematocrit 35%, red blood cells 4,000,000, white blood cells 9,000, eosinophils 10%… “She’s a little anemic,” I told him, “but probably not by losing blood, maybe she’s been ill recently, though judging by her white blood count I’d say she doesn’t have an infection at the moment. It does look like she may have hay fever…” I was just warming up and continued to read: Transaminases SGOT 7, SGPT 9, gamma-GT 60. “She should probably cut down a bit on the wine, it’s affecting her liver, but there’s no serious damage.” Fasting blood sugar 98, BUN 15, creatinine 0.9, urine red cells 0, white cells 2-3: “No diabetes, her kidneys work fine, no signs of urine infection.”

The exercise sat somewhere between Sherlock Holmes and Tarot cards. Sodium 138, potassium 3.4. “Does she have high blood pressure? Yes, that’s what I figured. Do you know if she’s taking a water pill? Yes? Well it’s driving her potassium down a bit, she needs to eat more fruit.” Sedimentation rate 25 “…She’s in her 50s, like you? Then this is normal for her age, if she were younger it would be a sign of inflammation…”

It astounded me to see how much information was stashed in those numbers.

Another time Peppino brought me his own EKG. When I interpreted it over my kitchen table his mouth fell open – for him the needle’s tracing was an oracular mystery that could only be read by the cardiologist who had actually strapped on the electrodes.

Sometimes I miss those days when doctoring in Italy was half-sorcery, and physicians competed with the hordes of operators telling fortunes on live TV. I also miss Peppino.”