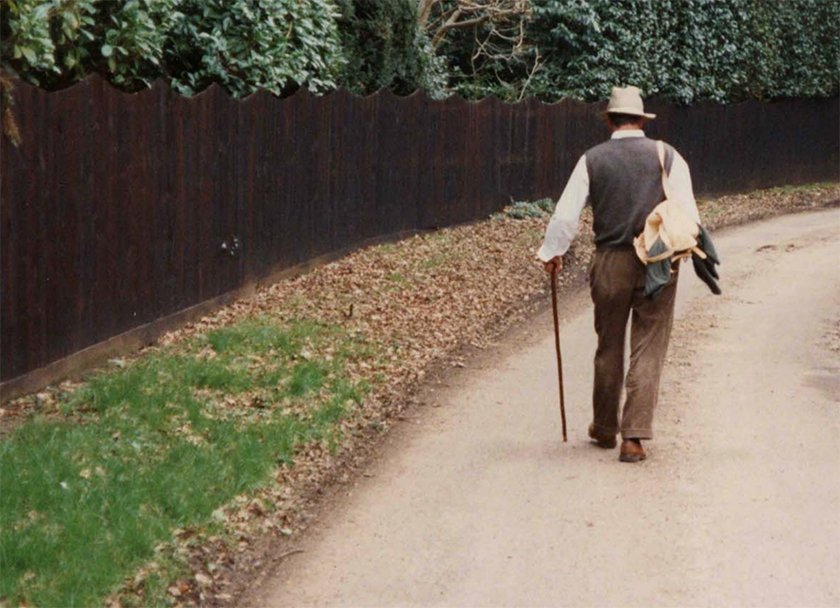 W.G. Sebald: a walker and a writer with the keenest of eyes.
O

nce upon a time, I was — in every way — what most people used to call a military brat.

I was born in a clinic located on a U.S. Air Force base in West Germany, my father an aircraft radar whizz kid, my mother his high school sweetheart, my brother, already four when I was born, my loveable sworn enemy. This was because I soon learned he hoarded candy.

Those early years were spent mostly in base housing with some trips to West German cities. We’d end up spending nearly a decade in Germany, so I learned the language well — really well, in fact. This was most because Karl, my brother, dared me to: he wanted nothing to do with German culture and mostly hung out with the U.S. military sons and daughters wherever my father was stationed. You could build a little America if you wanted to, and he did.

I was on the weirder side and took to liking books, learning to read them in German even though my mother wasn’t exactly supportive (“Why, it’s a rude language and it’s shared with communists”). I didn’t care much about rudeness or communists, not in my teens, and I really liked how German could compress complex thoughts into single words. I was sure I’d find a word that would mean, “I went to the movies, but the movie was as bad as the popcorn.” I mean, who else could come up with zeitgeist and götterdämmerung, two words that could get you through a conversation, one on the spirit of the times, the other on the twilight of the gods. Again, I ached only for popcorn, or maybe a word that could say, “I’m homesick, but I’m not really — because I have not yet come to know my home.”

And this was somewhat true around about 1990, when communists turned into ghosts and Dad the radar man got sent to Tulsa, which, trust me, is a lot less interesting than even an American airbase.

I’m derelict. I’ve left it too late —telling you why I’m putting all this down. Let me see if I can compress it.

I was sure I’d find a word that would mean, “I went to the movies, but the movie was as bad as the popcorn.”

When I went to college, I studied German and history. I also dabbled in literature, which wasn’t really my thing. I always liked non-fiction accounts, true stories of what really happened or what people thought happened. Then, a few years later, came my awakening. A German-born boyfriend gave me a copy of a book by a man named W.G. Sebald, a German who taught literature at the University of Manchester — in England, of all places.

The book I got was called “Vertigo,” and it essentially was a first-person narration by a man who takes a series of hikes through Switzerland and Italy. While walking he is constantly distracted by historical events that took place in these locations. The book didn’t fit into any category: novel, travelogue, and so on. It existed on its own terms, and I was mesmerized. This narrator, who loves to take short stops, whether on foot or train, couldn’t stop telling stories about the people and places around him. He was like some perfect upscale German tour guide, escorting us through the real world and its moral labyrinth.

This was in the late 1990s. Within a few years Sebald would be discovered, translated into English, and named a literary hero among those people who decide who’s good and who’s not. I wasn’t among them, so I didn’t care, and I was reading in German.

I read everything he’d ever written. It wasn’t much, but all of it was marked with this same kind of narrator meeting people, telling stories, letting passersby tell their stories, wanting to know more, wondering how Napoleon had felt on a certain day, or how the Germans could have turned on their culture by allowing Nazism. But unlike many other authors he went about this through tales about people so he wouldn’t burden the narrative.

I read an amazing masterpiece called “Austerlitz” that also involved train trips and walks through cities and glades, all the time looking at buildings and bridges and avenues (sketches included), as if these pieces of infrastructure might provide important clues about human behavior. “Austerlitz” contained more off-the-beaten-track bits of important historical detail than any book I’d ever read. It was as if Sebald had come up with what I’d been looking for as a kid, a way of making not just a word but a concert of German words and sentences into a means of explaining the mood of a time, if not of history itself.

I’d try to sell my friend on him, but most thought I was hitting some sort of early middle-age crisis by telling them to read an unknown — to them — German writer who was about as far from anything cool as you could get.

I read a group of essays in which he tried to explain how the Allied bombings of Germany in World War II had left a mark that couldn’t be erased, but that no one much cared about since the bombs fell on the bad guys, the Nazis. The Allies also flattened whole cities, which Europe mostly forgot about since Germany was the enemy. In those essays he also touched on smaller events, the effect on street sweepers and small businesses, and connected this to how humans could get so accustomed to the act of destruction they were unable to distinguish it from something constructive, since in a war annihilating an enemy town is in fact constructive. I read this above all because I was an Air Force girl and I knew what the American planes stationed in West Germany carried, and what would happen if they ever really dropped their payloads.

Sebald was like a surgeon who cut beneath the surface of things, as if he saw no surface.

That book’s German name was simply “Luftkrieg und Literatur,” which translates to “Bombing and Literature,” but non-German publishers, by then in love with Sebald’s mind, had to call it “On the Natural History of Destruction,” which I guess is sexier. Except that he wasn’t sexy, just amazingly and lucidly smart, like a surgeon who cut beneath the surface of things as if he saw no surface, and when he looked at humans he could see how their hearts beat and brains lit up.

All of my reading happened between 1990, when “Vertigo” came out in German, and 2001, when he died, not yet 60. Since his death, in a car crash in December 2001, his disappearance was lost in the shuffle of news about the September 11 attacks.

I don’t know why really, but I mourn him more than ever, and I more or less stopped reading a decade ago. Maybe it’s that in “Vertigo” and “Austerlitz,” the best of the wandering soul books, he took casual but focused trips that now seem all but impossible to duplicate, with many of his historical references no longer interesting to most. The grip of the pandemic puts a muzzle on chit-chat in trains, on walks through the countryside that allow pauses for speaking to strangers, or simply pausing to stare at a building that was once a constabulary for Hessians in the time of the Franco-Prussian War. What’s a Prussian? What’s a Hessian? Is it a virus strain? No. Okay, next.

It’s not all this way, I know, but I’m worried the Germans aren’t working hard enough on my popcorn vocabulary. I’m worried instead they’re trying to put together a four-syllable word or expression that suggests post-virus malaise in a time of climate change. So maybe I should thank Sebald for something simpler, that he makes me think of popcorn, and how learning German took me into a world I would never have known had it not been for his insatiable curiosity.