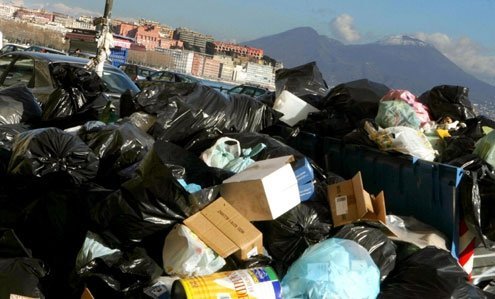 Make no mistake: There's a crisis. But not all of the city feels it.
I

was puzzled when I received emails from my American friends last October expressing sympathy for the situation I’d landed myself in. The never-ending Naples’ garbage crisis had been in the news again. Clearly my friends thought I was living directly on top of a landfill.

I wasn’t, I assured them. In fact, the trash on my street was picked up every day, including Sunday.

News reports that reached the United States may have sensationalized the filth of it all. Central Naples has been largely immune to growing trash problem, which is focused in rougher areas of the city. In the center, most waste is conscientiously stacked beside trash receptacles and consists of cardboard boxes and neatly tied bags. The smell is no worse than walking by a manhole in Philadelphia or New York City.

But in the suburbs and towns such as Terzigno, near Naples, where residential housing is located next door to to landfills, continued dumping has produced intense protest. It’s a serious issue likely to continue vexing the Campania region and the Italian government for years to come.

Though central Naples did face a number of protests last fall, those stopped as the backlog began diminishing. Recently, though, refuse has started piling up again, prompting renewed local protests and a promise from newly-elected Mayor Luigi de Magistris to institute 24-hour collection. The unemployed have already been drafted to clean up the city’s sea front.

But I repeat: My street remains clean, as do many other areas of town.

My Neapolitan hairdresser credits the Camorra — the Naples mob — for “managing” the crisis, saying they are the city’s only powerbrokers. I’m not here for long enough to become politically involved. I just enjoy having my trash emptied daily.

With many trash piles it’s clear they’re still being collected regularly. I’ll visit refuse-free areas, come back a few days later, and see a pileup. But five days or a week later it’s gone, and the process begins again. I’ve learned not to mind the spectacle. It is easy to distinguish between trash deposited a day or two ago from garbage that’s been sitting for weeks or months.

“That’s fresh trash,” I tell people who come to visit me from the United States. “It’s fine.” And I mean it.

Though the places where the predicament is more severe, and more visible, are usually far away from common tourists spots, that doesn’t stop visitors from returning home with horror stories. “Naples is a sh*thole,” a man told me and my husband as we flew here to live. He spoke with absolute conviction.

It’s possible that I love some aspects of Neapolitan culture so much that they make me tolerant of less pleasant ones, like trash. I’ve often said that any city with Naples’ combination of superb food, coffee and museums is worth admiring.

I’ve also spent enough time in other areas of Italy that have some of the same characteristics (raging motorcycles, litter, graffiti) that I know that all of these aren’t uniquely Neapolitan phenomena.

One difference is that in Naples, most locals don’t care to put on a show for the benefit of the touring masses. This makes me enjoy Naples more than other Italian cities where everyone speaks English, half the restaurants push “tourist menus” and shop owners will compliment your Italian even when you make an obvious mistake.

I think it causes other visitors to find the city less welcoming, which in turn makes them more likely to dwell on parts they find unpleasant. Trash, for instance.

To me, Neapolitans’ gratification toward those who take time to learn about their city makes up for any rough edges.

Recently I was watching a group of two Neapolitan men and a woman at a downtown Naples bar when they caught me eyeing their baba‘, a Neapolitan sponge cake soaked in rum.

“E’ un vero baba’,” one of the men said emphatically to me, explaining it was a true version of the Neapolitan specialty. He asked where I was from, and I told him, adding how much I enjoyed living in the city (and how I’d already eaten my fair share of baba‘ there).

“Vuoi un pezzo?” asked the other man, inquiring whether I wanted a piece. I politely refused. But the woman with them speared a forkful and held it out me at arm’s length. “Ecco,” she said.

I couldn’t say no at that point. I bent down and ate baba‘ off a stranger’s fork.

If there was smoke in the air or litter on the ground at that moment, I didn’t notice.

I’ll take living in Naples over another city any day, even it means passing the occasional pile of trash.