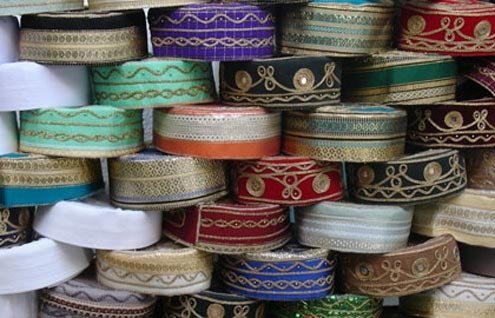 Hats in a Tunisian souk — straight to your couch.
A

good trip has much in common with a good book. By triggering the imagination, books imitate the act of going somewhere. Imagery sparked by words can stretch your mind to places you’ve never been.

An eloquent description of a Tunisian souk — the pungency, loudness, voices, and bright colors muted by dusty shadows — can bring the labyrinthine passages to your couch. Writing can do that. Consider American novelist Paul Bowles, who spent most of his life in Morocco: “When you arrive in Sahara, for the first or the tenth time, you notice the stillness … Then there is the sky, compared to which all other skies seem fainthearted efforts. Solid and luminous, it is always the focal point of the landscape.”

In short, reading is the next best thing to actually traveling. I can’t deny it: I read to extend myself beyond actual borders, to go to other places, to be other people.

But there’s another kind of reading I do that’s more directly related to traveling. I call this the pre-adventure read, and it means what the name implies, learning what you can about where you’re headed. Most travelers do this automatically.

Anticipation helps build excitement and expectation, which can spice up an upcoming trip. The maps, language keys, dinner suggestions, and short descriptions of towns and cities that guides contain whet the appetite, particularly if you’re headed to an outlying place. I think of a good travel guide as an outline.

A few years ago, before going to Thailand, I bought only a guide. But once there, I began craving the kind of reading I normally do before a trip. Something was missing. The context wasn’t completely filled in. The missing ingredient was fiction set in Thailand, and I started my search too late. Had I looked, I might have found Rattawut Lapcharoensap’s 2005 “Sightseeing,” short stories about local life in today’s Thailand, including one about a Thai orphan who tells tourists: “I was raised in the jungle by a family of gibbons.” Some believe him.

Fiction and nonfiction work equally well as pre-adventure reads. Since I’m an ardent fan of fiction, I tend to use stories and novels as a warm-up. My only requirement is that the book (or books) be about or set in the country where you intend to travel. Before going to Prague I picked up Milan Kundera’s “The Unbearable Lightness of Being,” which I finished in the city where it was set. Like all good pre-adventure reads, it gave me context and portraits of people. It built up my curiosity about communism, the 1968 Prague Spring, and the clampdown that followed.

It also elicited hidden layers, including the city’s relationship to Berlin, Bucharest and Warsaw, three cities that unlike Prague were badly damaged in World War II. “The people of Prague had an inferiority complex with respect to those other cities,” wrote Kundera. For Kundera, Prague suffered from survivor’s guilt.

When I was 20 and preparing my own passage to India, I spent whole nights rummaging through fiction and nonfiction. India’s “foreignness” was so powerful I sought any and all possible bearings. I remember “A Fine Balance” by Rohinton Mistry, and, of course, E.M. Forster’s “A Passage to India” — a novel I brought with me but finally gave up on, since the reality of Forster’s colonial India had nothing in common with what was unfolding before my eyes.

I also remember Gita Mehta’s “Snakes and Ladders,” which probed the realities of the dowry system and the rite of “sati,” in which women burn themselves alive on their husband’s funeral pyre. I read about the country’s complex caste system and the contradictions of its (now-thriving) economy. For months — intensified in the few weeks before I left — I stuffed myself with thoughts and words, perspectives and voices.

Reading doesn’t protect you from reality. Instead, it sharpens what you see. First-hand, I was shocked to see the functioning of the caste system, the depth of poverty, and the role of Indian women. But without preparation, the shock would have been double.

For me, reading before traveling has become second nature. It’s a flavor enhancer and an adventure in is own right. “Whereas the tourist generally hurries back home at the end of a few weeks or months,” wrote Bowles, “the traveler … moves slowly over periods of years, from one part of the earth to another.” If you let your eyes work at it, some of the slow moving can start at home.