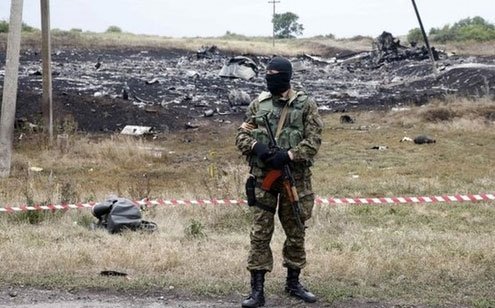 The downing of Malaysian airliner has opened the door to predictable but unfortunate hyperbole.
I

f there was once a cardinal rule in writing wire service dispatches, it was this: never make it personal. Facing the heinous, the dastardly, the awful or the disagreeable — news so distasteful it seemed to call for wild alarm — maintain your composure. Write what you know. Criticize though reason.

Though writers of opinion were not bound by this clause, their narrations also carried a burden, that of understatement. The worst opinion was the kind that openly and obviously spiked the punch, descending into mockery.

Mass media priorities are subject to ebb and flow. Loudness is a revived virtue, and with it ridicule, both intended to evoke emotional responses, as prized now as they were a century ago. Detachment is a dirty word. It’s rile and be riled, with scorn or praise in the service of rhetorical exaggeration. British essayist Christopher Hitchens, a smart man, toed this raging path, and now, a few years later, he is joined by his contemporary, Timothy Garton Ash, the author of many probing essays on the end of communism and the multifaceted overhaul of Eastern Europe since 1990.

Ash was recently tasked by the New York Times to weigh in on the bloody goings on in Ukraine after the downing of a Malaysian airliner. He began by recalling a 1994 conference in which “annoying things” were spoken “tiresome people.” He was at a St. Petersburg roundtable when “a short, thick-set little man with a rat-like face, apparently a sidekick of the city’s mayor” began insisting on Russia’s need to protect residents of former republics, now independent. The rat-man, and here Ash sarcastically dots his own “i,” was — “you guessed it” — Vladimir Putin. Soon after, Ash refers to Putin is referred to as the “uncrowned czar of all the Russians,” a “perverted” thinker, and someone who has embraced a “resentment-fueled protector state doctrine.”

None of this does effective opinion any favors. Covering the deeds of those perceived as loathsome does not and should not require adopting same kind of resentment in words that the recipient of the loathing applies through coercive force, whether direct or clandestine.

Ash may well be right — along with many others — in calling out Putin, whose territorial recklessness and sense of Russian entitlement is both real and troubling. He may also be right in warning the world about the rat-like man’s ambitions. But his duty is to make his point without recourse to rodents and personal irritations because — and here’s the irony — introducing such caricature preaches only to one choir, salivating Putin-haters, cutting out those who might be brought around with more sparing and disciplined prose.

Criticism, like anything else, has both high road and a low. Its low end depends on dollops of outrage and insult, comedy and parody — witness cable “news “shows. The higher end, now invariably labeled as appeasing, openly forgoes insult to make a cooler case for why a man and his policies might in fact be dangerous.

His dander up, Ash writes: “[Putin] subverts and calls into question the authority of the government of a sovereign territory, and then blames it for the result,” this in regard to the destruction of the Malaysian jet. At the same time, until December, that same sovereign Ukraine had a president, Viktor Yanukovych, who had served as his country’s acknowledged (if disputed) leader since 2010.

The wisest course of action available to those who disliked Yanukovych’s pro-Moscow leanings would have to oust him in subsequent elections, and let a new government review and if necessary annul disagreeable pacts. Instead, hardcore dissidents went to war in Kiev’s streets and helped create a civil war’s bloody preamble. In all this, the West played cheerleader, laying into Yanukovych while encouraging martyred “democrats” and heaping scorn on rat-man. Next came the Russian annexation of Crimea. The circle was squared.

Few pundits outside Russian chose to examine Putin’s actions in the context of border paranoia. The incipient United States fought Mexico over Texas. India and Pakistan have collided repeatedly over Kashmir. Borders are a sore point that the U.S. and England, removed from enemies by Atlantic waters, have never known to fully understand.

Historian Ash is no one’s fool. While he hates Putin for generating “ideologies of resentment”, he knows not to deny that the ideal of a Greater Russia (similar in scope to American Manifest Destiny) existed both in the czarist times and under Soviet communism.

Explaining history is one thing; rat references another. “It is hypocrisy on an Orwellian scale,” writes Ash, “for Mr. Putin to maintain … that the government over whose territory this happened bears the responsibility for this terrible tragedy.”

Also of Orwellian scale, however, is the collapse of astute criticism, in which astuteness means the conscious if difficult setting aside of caricature lest the makers of the same caricature slowly come to sound as disturbed as those they disdain.