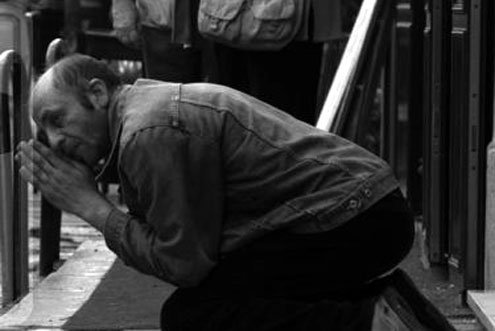 By giving money to these people, you're supporting organized crime.
E

very morning, an old Albanian man begs on the corner of Milan’s Viale Zara and Via Stelvio. His bowlegs are bent and stiff; his brown leather shoes curl at the toes. He wears a big shirt and blue wool cap. He reminds me of a vicious rodent, scurrying along the road, snarling at car drivers who wait at the traffic light. He bangs on the windows, shakes his fists, stops pedestrians and blocks their way, yelling and cursing.

A group of women watches him from the safety of the no. 31 tram. Someone says she’d feel more like giving the man something if he’d show some humility. “They think everything is owed them.”

Another woman says, “Look at him! C’è d’aver paura” (“How frightening.”) The Albanian has grabbed a man by the jacket. Everyone on the tram is watching now. People ask why the police don’t do something.

“Un psycho like that could get dangerous,” someone says, “I tell my children to go another way. He’s violent.'” One man observes that “these types” are now part of the Milan landscape.

I leave the tram and take a road home that avoids the Ratman, as I’ve come to think of him. On the way, I meet a man selling red roses, the small-headed ones that come from Kenya and are often sold by Sri Lankan vendors in restaurants and on sidewalks. This man looks South American, though, maybe Peruvian. He doesn’t insist when I say no. On the contrary he seems embarrassed to have to ask. I walk away quickly. He approaches a man, who refuses him.

While I wait at the traffic light, I watch the flower-seller. He seems undecided about which way to turn. He’s standing there, slumped over, bouquet hanging. He looks defeated. He’s a young man, a defeated young man. I think, “How much can a rose set me back?” I wave to him. He doesn’t notice me at first but, when he does, he comes running.

I think of a friend who warned me, “By giving money to these people, you’re supporting organized crime.” In fact, Milan mayor Letizia Moratti, up for re-election, recently announced that 18 new police patrols will battle urban decay. She mentioned specifically bothersome (“molesto“) beggars and unauthorized flower sellers. Offenders will be fined up to €450, detained and blacklisted, their supplies confiscated.

I give the rose vendor a €5 bill. His smile is enormous. He’s a handsome man, with white teeth and bright eyes. He says grazie again and again, a dozen times. It bowls me over – this much gratitude for such a small thing. He gives me two roses and says, “Bambini mangiare…” (“the children need to eat.”). We shake hands; we’ve concluded a business deal. He stands taller and thanks me again. Then we go our separate ways.

The next day, in a spirit of scientific inquiry, I decide to see what will happen if I give my loose change to the little Ratman. When I notice him, he’s busy cursing the drivers at the traffic light. When the light changes he comes toward me with his bandaged arm outstretched. He rubs his thumb against his fingertips to tell me he wants money. When I nod and hold out my hand, he stops, surprised, then hurries forward.

I drop my coins into his hand. He doesn’t count them; he doesn’t even look at them. He looks at me. He’s less than five-feet tall. His face is wrinkled and brown like someone who has lived his life outdoors. His black eyes squint at me. He smells faintly of old sweat but not of liquor.

I give him a false name, Lina.

His chin wobbles and suddenly, tears pour down his face. He cries like a little boy, a little Oliver Twist, ill-equipped to fend for himself in a hostile world. He repeats thank you, thank you. He throws open his arms and hugs me, kisses one cheek, kisses the other cheek, hugs me again.

“Where do you live?” I ask him. He shakes his head.

“Where do you sleep?”

“Baracca” (shantytown). He thanks me again, still crying, and says goodbye.

I notice that, when the next car stops at the light, the Ratman bangs on the window, shows the driver his coins and points to me, by now across the street. The driver ignores him and receives the usual curses.

An hour later, on my way home, I see the Ratman again. He gets shooed out of a bakery and a butcher’s shop. I pass near to him but he doesn’t acknowledge me, doesn’t seem to recognize me.

When I get home, I tell my husband what happened. “Go wash your hands,” he says. “Don’t touch any food.”